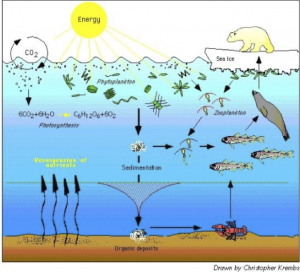 Note that the right-hand sides of the equations sum to zero, so the NPZ model conserves the total amount of nitrogen in the system,
\[
(N+P+Z) (t) = (N+P+Z) (0) , \quad t \in \mathbb{R} .
\]
The most common use of NPZ models is for theoretical investigations, to see how the model behaves if different transfer functions are used.

A survey of the merits and limitations of the NPZ model is given in the review article P. J. Franks, “NPZ models of plankton dynamics: Their construction, coupling to physics, and application,” Journal of Oceanography, 58 (2002), pp. 379–387, with an interesting follow-up article by the same author, Peter S. Franks, “Planktonic ecosystem models: perplexing parameterizations and a failure to fail,”, Journal of Plankton Research, 31 (2009), pp. 1299–1306. See also the recent textbook by H. Kaper and H. Engler, “Mathematics and Climate,” Chapter 18, OT131, SIAM, Philadelphia (2013).