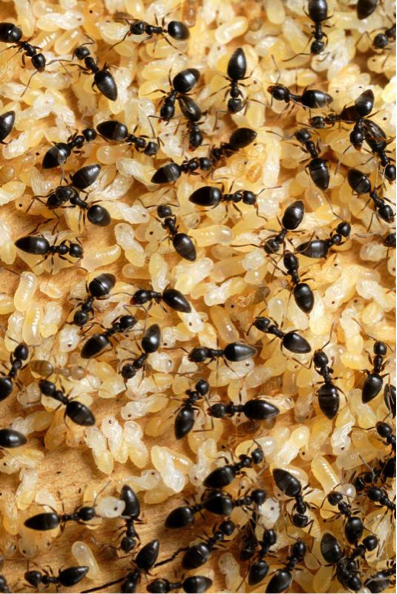 Martin Nowak gave a public lecture at CRM on November 6. His lecture was part of the activities of the thematic semester “Biodiversity and Evolution,” which takes place this fall.

It is a great scientific problem to understand why biodiversity has become so large on Earth. Mutations allow for the appearance of new species. Selection is an important principle of evolution. But selection works against biodiversity. The biodiversity we observe on Earth is too large to be only explained through mutations and selection. Another force is needed. Martin Nowak identified this other force in 2003: cooperation! The title of his public lecture, “The evolution of cooperation: why we need each other to succeed,” dealt with this theme.

Nowak explained how cooperation is widespread in the living world. Bacteria cooperate for the survival of the species. Eusociality describes the very sophisticated behavior of social insects like ants and bees, where each individual works for the good of the community. Human society is organized around cooperation, from the good Samaritan to the Japanese worker who accepts to work on the cleaning of Fukushima’s nuclear plant: “There are only some of us who can do this job. I’m single and young, and I feel it’s my duty to help settle this problem.” Cells in the organism cooperate and only replicate when it is timely, and cancer occurs when cells stop cooperating.

Nowak then gave a mathematical definition of cooperation. A donor pays a cost, $c$, for a recipient to get a benefit, $b$, greater than $c$. This brings us to the prisoner’s dilemma. Each prisoner has the choice of cooperating and paying the cost $c$ or defecting. From each prisoner’s point of view, whatever the other does, his better choice is to defect. This means that the rational player will choose to defect. But the other prisoner will make the same reasoning. Then they will both defect $\ldots$ and get nothing. They could each have got $b-c$ if they had behaved irrationally and had chosen to cooperate…

Direct reciprocity: I help you, you help me. Tit-for-tat is a corresponding good strategy for repeated rounds of the prisoner’s dilemma: I start with cooperation; if you cooperate, I will cooperate; if you defect, then I will defect. This strategy leads to communities of cooperators, but it is unforgiving when there is an error. This leads to a search for better strategies: the generous tit-for-tat strategy incorporates the following difference: If you defect, then I will defect with probability $q=1-b/c$. This leads to an evolution of forgiveness. Another good strategy is win-stay, lose-shift. For each of these strategies the lecturer explained under which mathematical conditions the strategy performs well and leads to a community of cooperators.

Indirect reciprocity: I help you, somebody helps me. The experimental confirmation is that, by helping others, one builds one’s reputation: people help those who help others, and helpful people have a higher payoff at the end. Games of indirect reciprocity lead to the evolution of social intelligence. Since individuals need to be able to talk to each other, there should be some form of language and communication in the population.

Spatial selection: an individual interacts with his neighbors: cooperators pay a costs for neighbors to receive a benefit; it favors cooperation if $b/c>k$, where $k$ is the average number of neighbors. This is studied through spatial games, games on graphs (the graph describing a social network), and evolutionary set theory.

Group selection: “There can be no doubt that a tribe including many members who [$\ldots$] are always ready to give aid to each other and to sacrifice themselves for the common good, would be victorious over other tribes; and this would be natural selection.” (Charles Darwin, The Descent of Man, 1871) In group selection, you play the game with others in your group. Offspring are added to the group. Groups divide when reaching a certain size. Groups die. The strategy favors cooperation if $b/c>1+n/m$, where $n$ is the group size and $m$ the number of groups.

Kin selection occurs among genetically related individuals. The strategy is related with Hamilton’s rule. Nowak explained the scientific controversy around Hamilton’s rule and inclusive fitness, which is a limited and problematic concept.

Direct and indirect reciprocity are essential for understanding the evolution of any pro-social behavior in humans. Citing the lecturer: “But ‘what made us human’ is indirect reciprocity, because it selected for social intelligence and human language.”

Novak ended his beautiful lecture with an image of the Earth and the following sentence: “ We must learn global cooperation $\ldots$ and cooperation for future generations.” This started a passionate period of questions, first in the lecture room, and then around a glass of wine during the vin d’honneur.