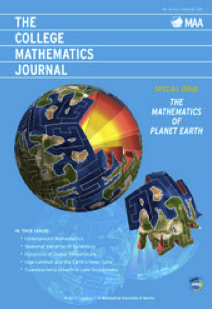 The November issue of The College Mathematics Journal is a special theme issue supporting the Mathematics of Planet Earth initiative, MPE 2013. The articles in this extra large issue discuss a wide range of earth science and environmental questions. The issue is freely available to all.

The issue begins with a guest editorial by Mary Lou Zeeman relating mathematics to sustainability and concludes with a review by Ben Fusaro of the recent book “Mathematics for the Environment” by Martin Walter.