Half-way between chemistry and physics, the exploration of applications of ultrafast laser pulses is a very promising research topic with many potential applications, including meteorology and climate. These ultrafast laser pulses range over a time scale of femtoseconds ($10^{-15}$ seconds) to attoseconds ($10^{-18}$ seconds, the natural time scale of the electron). Modern laser technology allows the generation of ultrafast (few cycle) pulses with intensities exceeding the internal electric field in atoms and molecules: $E = 5 \times 10^9\,$ V/cm, equivalent to the intensity $I = 3.5 \times 10^{16}\,$ W/cm${}^2$.

The interaction of such pulses with atoms and molecules leads to regimes where new physical phenomena can occur, such as High Harmonic Generation (HHG) from which the shortest attosecond pulses have been created. One of the major experimental discoveries in this new regime is the Laser Pulse Filamentation (LPF), first observed by Mourou and Braun in 1995, where pulses with intense narrow cones can propagate over large distances. The discovery has led to intensive investigations in physics and applied mathematics to understand new effects such as the creation of solitons, self-transformation of these pulses into white light, intensity clamping, and multiple filamentation.

Potential applications include wave-guide writing, atmospheric remote sensing and lightning guiding. Laboratory experiments show that intense and ultrafast laser pulses propagating in the atmosphere create successive optical solitons. These highly nonlinear nonperturbative phenomena are modeled by nonlinear Schroedinger equations (NLSEs), allowing the prediction of new phenomena such as “rogue” waves, also associated with “Tsunamis” in oceanography. (Nonperturbative means that it is impossible to separate the global system in two systems: a dominant system and a small perturbation of it. When such a decomposition exists, it allows using perturbation methods to analyze the solution of the global systems from the solutions of the dominant system.) 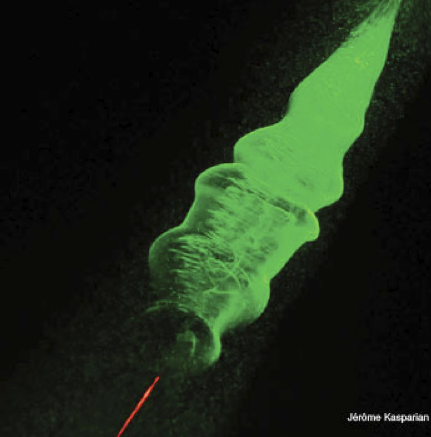 Cloud of water droplets generated in a cloud chamber by laser filaments (in red). The cloud is demonstrated through the scattering of a green laser beam collinear to the first one.

Field experiments of self-guided ionized filaments for real-scale atmospheric testing are carried out, for instance by Teramobile, an international project initiated jointly by the National Center for Scientific Research (CNRS) in France and the German Research Foundation (DFG). Recently it was discovered that such intense laser pulses can create optical “rogue” waves. It is also known that these intense ultrafast pulses can generate storms or hurricanes within a distance of a few kilometers.

This raises the extremely interesting question: Is there a way to use these laser pulses to control atmospheric perturbations? Research goes into at least two directions. The first one is to exploit the laser filaments induced condensation of water vapor, even in subsaturated conditions. A second one is to use laser filaments to control lightning with the hope, in particular, to be able to protect critical facilities.

A first conference on Laser-based Weather Control (LWC2011) took place in 2011. A second Conference (LWC2013) took place at the World Meteorological Organization (WMO) in Geneva last September. On the home page of the conference we find the following statement:

“As highlighted by the success of the first Conference on Laser-based Weather Control in 2011, ultra-short lasers launched into the atmosphere have emerged as a promising prospective tool for weather modulation and climate studies. Such prospects include lightning control and laser-assisted condensation, as well as the striking similarities between the non-linear optical propagation and natural phenomena like rogue waves or climate bifurcations. Although these new perspectives triggered an increasing interest and activity in many groups worldwide, the highly interdisciplinary nature of the subject limited its development, due to the need for enhanced contacts between laser and atmospheric physicists, chemists, electrical engineers, meteorologists, and climatologists. Further strengthening this link is precisely the aim of the second Conference on Laser, Weather and Climate (LWC2013) in Geneva, gathering the most prominent specialists on both sides for tutorial talks, free discussions as well as networking.”

Where is the mathematics in all this? The phenomena induced by intense ultrafast laser pulses are nonperturbative and highly nonlinear. The phenomena are studied through highly nonlinear PDEs. This is why the Centre de recherches mathématiques (CRM) is organizing a workshop “Mathematical models and methods in Laser Filamentation” at the University of Montreal, March 10-14, 2014. It is organized by André Dieter Bandrauk (Sherbrooke and CRM), Emmanuel Lorin de la Grandmaison (Carleton and CRM) and Jerome V. Moloney (Maths and Optics Center, U. Arizona).