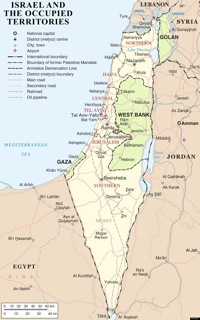 One of the main ideas behind the MPE2013 project was to showcase how mathematics solves the problems of the planet in ways that are are analytical and useful. At the heart of this initiative is the belief that when one uses mathematical models, the results are unemotional and valid, at least given that the model is a good approximation to the problem at hand. The hope then is that those in power will pay attention to the mathematics. This of course assumes something about the reasonableness of those in power, but for topics like climate change, the neutrality of mathematics should be an advantage in arguing for policy change.

The November issue of the AMS Notices has an intriguing article about the use of mathematics to help solve the Middle East Conflict. The authors, Thomas L. Saaty and H. J. Zoffer, discuss how the Analytic Hierarchy Process (AHP) can to used to help sort out the complex issues of the Israeli-Palestinian conflict. In their words, the advantages of the AHP in dealing with conflicts is “that the process creatively decomposes complex issues into smaller and more manageable segments. It also minimizes the impact of unrestrained emotions by imposing a mathematical construct, pairwise comparisons and prioritization with a numerical ordering of the issues and concessions.” The article reports in detail (and fills in some of the mathematics at its core) on a meeting of the two sides held in Pittsburgh, Pennsylvania in August of 2011, where important progress was made in addressing the critical issues of the conflict. The Pittsburgh Principles were the outcome of that meeting and they are described at the end in the article. The article is available here.