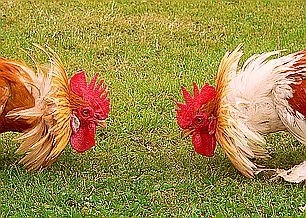 More and more the political wrangling over the government shutdown (and the looming debt ceiling) is described as a game of “Chicken,” which you probably know is the suicidal, hormonally charged confrontation of two teenage boys driving down a highway straight at each other. Whoever swerves first loses, but if neither swerves they also lose.

It does seem more complicated than that to me, but it could be instructive to analyze the game of Chicken from the perspective of classical game theory. For this we assign numerical values to the various outcomes for the players’ choices. I will use the numbers in Philip Straffin’s book Game Theory and Strategy published by the MAA. There are two players A and B (Administration and Boehner). Each has two strategies: swerve or don’t swerve. The rows of the payoff matrix represent A’s choices and the columns the choices of B. There is a pair of numbers for each of the four outcomes with the first number being the payoff to A and the second the payoff to B

For example, the pair (-2,1) in the upper right corner means that if A swerves and B doesn’t, then A loses two units and B gains one unit. Chicken is not a zero-sum game.

There are two Nash equilibria in the payoff matrix. These are the upper right and lower left corners in which one player swerves and the other doesn’t. With these scenarios neither player can do better by switching to a different option when the other player does not switch. (The definition of a Nash equilibrium is just that: it is a simultaneous choice of strategies for all the players so that no player can improve his lot by switching under the assumption that the other players do not change their choices.)

And so it seems that there is no satisfactory solution to the game of Chicken and related games such as The Prisoner’s Dilemma—at least within the confines of classical game theory.

For some current commentary on game theory and the budget stalemate read the interview with Daniel Diermeier in the Washington Post.