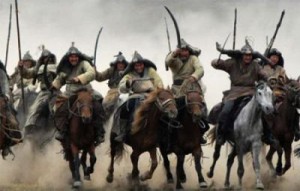 Another mathematical modeling success is highlighted in a September 23, 2013, Science News story that describes the evolution of ancient complex societies. One interesting fact reported is that intense warfare is the evolutionary driver of complex societies. The findings accurately match the historical records. The study was done by a trans-disciplinary team at the University of Connecticut, the University of Exeter, and NIMBioS and is available as an open access article in the Proceedings of the National Academy of Sciences. To see a simulation try this, and for more information see the press release.