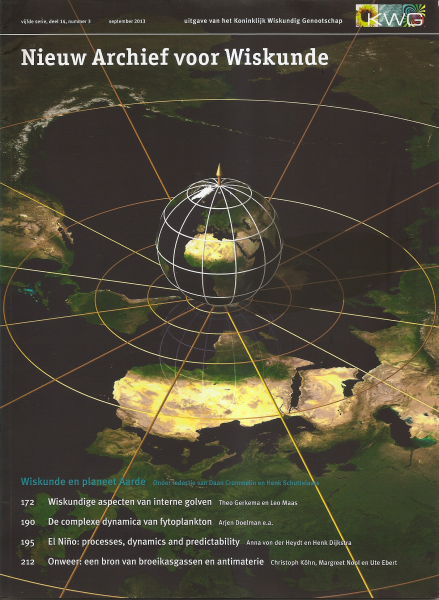 What is a wave attractor? How can we “see” below the Earth’s surface while staying above ground? And what does desertification have to do with balloons?

These and other topics are discussed in the September 2013 issue of the Nieuw Archief voor Wiskunde (NAW, translated as “New Archive for Mathematics”), the quarterly journal of the Royal Mathematical Society (KWG) of the Netherlands. The NAW is aimed at a broad audience: anyone professionally involved in mathematics, whether as an academic or industrial researcher, student, teacher, journalist or decision maker.

The September 2013 issue of the NAW is dedicated to Mathematics of Planet Earth (MPE) and contains 11 articles and two interviews revolving around the MPE theme. Topics vary from phytoplankton to lightning and from El Niño to sand banks. The articles become freely available online one year after publication. Most of the articles are in Dutch, and for those readers who do not speak Dutch or who want to read about these topics now rather than later, I will give a brief overview of the articles. In most cases, further information and relevant research papers can be found on the authors’ Web sites.

In the next article, Arnold Heemink (TU Delft) and Peter Jan van Leeuwen (University of Reading, UK) review the most important current data assimilation methods. Among atmosphere and ocean scientists, data assimilation is the technique for systematically combining models and observations. It is an important aspect, for example, of operational weather prediction. Modern data assimilation methods build on ideas from optimal control and filter theory, and the development of these methods is a very active area of research where both mathematicians and atmosphere– and ocean scientists are involved.

Internal waves are waves below the surface of a lake or ocean. They are caused by density stratification and rotation of the Earth and behave very differently from free surface waves. This is related to the non-separability of the wave equation, as explained by Theo Gerkema and Leo Maas (NIOZ, Netherlands Institute for Ocean Research). In many water basins with sloping boundaries, the internal waves can get “caught” (or focused) in specific locations, forming a so-called wave attractor.

At the bottom of the sea, another interesting type of pattern formation can occur. Henk Schuttelaars (TU Delft) and Huib de Swart (University of Utrecht) discuss morphodynamics, the formation and evolution of patterns such as sand banks and beach cusps by sediment transport in shallow seas. These can be studied by formulating and analyzing nonlinear models combining fluid flow, sediment transport, and bottom topography.

The next article brings us from the bottom to the surface of the ocean. Brenny van Groesen (University of Twente) and Frits van Beckum describe a variational formulation for the motion of the ocean surface. This formulation preserves the Hamiltonian structure of the equations for the surface motion, making it very suitable for modeling and simulation of free surface waves. The authors present several examples, such as wave focusing, the occurrence of freak waves, and prediction of waves from radar observations.

Antonios Zagaris (University of Twente) and co-workers discuss the dynamics of phytoplankton patterns in the ocean. Several types of models can be used to study phytoplankton dynamics, among them the so-called NPZ models (coupled ordinary differential equations for nutrient, phytoplankton and zooplankton) and reaction-diffusion systems for the vertical distribution of plankton and nutrient. These models can display very complex behavior, including phytoplankton blooms and spatio-temporal chaos.

El Niño is a natural climate variability pattern primarily taking place in the tropical Pacific Ocean, with characteristic large-scale sea-surface temperature patterns coupled to associated changes in the atmospheric circulation. Anna von der Heydt and Henk Dijkstra (both University of Utrecht) describe the hierarchy of models that have been developed to understand the physics of this phenomenon and to make predictions of future variability. The predictability of El Niño events is still limited to about 6–9 months due to inherent nonlinear processes.

Under slowly changing environmental conditions (for example, average rainfall), healthy ecosystems can suddenly collapse to a desert state. Such catastrophic changes can be studied using conceptual models consisting of reaction-diffusion equations, as explained by Arjen Doelman (University of Leiden) and co-workers. The vegetation patterns in these models can destabilize one by one, until the desert state remains as the only stable pattern. The region of stable periodic patterns in the space of pattern wavenumber versus model parameter (for example, rainfall) is sometimes referred to as the “Busse-balloon.”

In an article by Hans van Duijn and Sorin Pop (both TU Eindhoven), models for porous media flow with multiple fluids (for example, water and oil) are discussed. Such models are important for studying techniques such as geological storage of CO2 and water driven oil recovery. They consist of conservation laws and often contain nonlinearities that preclude the existence of classical solutions, leading to the study of weak solutions, admissible shocks, and saturation overshoots.

Lightning and other types of electric discharges in the atmosphere (such as elves, sprites, and jets) are difficult to measure and to investigate experimentally. Because of their destructive power and their contribution to greenhouse gases (production of NOx, leading to ozone), numerical simulation is an important tool for studying atmospheric discharges. Christoph Koehn, Margreet Nool and Ute Ebert (all CWI Amsterdam) explain how they simulate discharges with hybrid models that combine a continuum (density) description with a particle model.

The final article of the NAW MPE theme issue is concerned with seismic inversion. To study subsurface structure, waves are generated with acoustic sources at the Earth (or sea) surface. The reflection of these waves by subsurface layers are measured with special microphones at the surface. Inferring (i.e., reconstructing) the subsurface structure from the reflection data is a challenging inverse problem, as discussed by Chris Stolk (University of Amsterdam).