At the end of August, Nature Climate Change published an interesting paper showing that current global climate models (GCMs) tend to significantly overestimate the warming observed in the last two decades [1]. A few months earlier, Science had published a paper showing that four top-level global climate models, when run on a planet with no continents and entirely covered with water (an “aqua-planet”), produce cloud and precipitation patterns that are dramatically different from one model to another [2]. At the same time, most models tend to underestimate summer melting of Arctic sea ice [3] and display significant discrepancies in the reproduction of precipitation and its trends in the area affected by the Indian summer monsoon. To close the circle, precipitation data in this area also show important differences from one data set to another, especially when solid precipitation (snow) plays a dominant role [4].

Should we use these results to conclude that climate projections cannot be trusted and that all global warming claims should be revised? Not at all. However, it would be equally wrong to ignore these findings, assume that what we know today is enough, and not invest in further research activities.

Climate is a complex dynamical system, and we should be aware of the difficulties in properly understanding and predicting it. Global climate models are the most important, perhaps the only type of instrument that the scientific community has at its disposal to estimate the evolution of future climates, and they incorporate the results of several decades of passionate scientific inquiries. However, no model is perfect, and it would be a capital mistake to be content with the current state of description and think that everything will be solved if only we use bigger, more powerful, and faster computers, or organize climate science more along the lines of a big corporation.

Like all sciences, the study of climate requires observations and data. Today, enormous quantities of high-resolution, precise, and reliable data about our planet are available, provided by satellites and by a dense network of ground stations. The observational data sets are now so large that we have to cope with the serious problems of storing and efficiently accessing the information provided by the many measurement systems active on Earth and making these data available to scientists, decision-makers, and end-users.

On the other hand, data must be analyzed and interpreted. They should provide the basis for conceptual understanding and for the development of theories. Here, a few problems appear: some parts of the climate system can be described by laws based on “first principles” (the dynamics of the atmosphere and the oceans, or radiative processes in the atmosphere), while others are described by semi-empirical laws. We do not know the equations of a forest, but we do need to include vegetation in our description of climate, as forests are a crucial player in the system. In addition, even for the more “mechanical” components we cannot describe all climatic processes at once: it is not feasible to describe, at the same time, the motion of an entire ocean basin or of the planetary atmosphere and take into account the little turbulent swirls at the scale of a few centimeters. 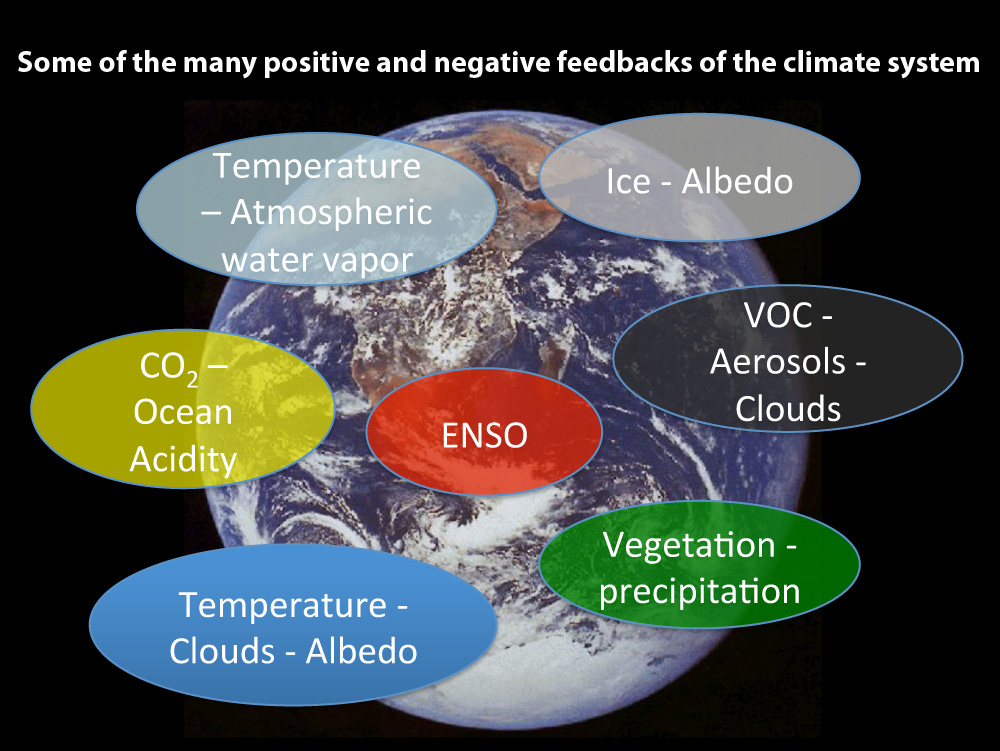 Climate still has many aspects which are poorly understood, including the role of cross-scale interactions, the dynamics of clouds and of convection, the direct and indirect effects of aerosols, the role of the biosphere, and many aspects of ocean-atmosphere exchanges. To address these issues, the whole hierarchy of modeling tools is necessary, and new ideas and interpretations must be developed. The hydrological cycle, for example, is one of the most important components of the climate of our planet and has a crucial impact on our own life. Still, precipitation intensity and variability are poorly reproduced by climate models, and a huge effort on further investigating such themes is required. Basic research on these topics should continue to provide better descriptions and—ultimately—better models for coping with societal demands. Scientific activities in this field should certainly be coordinated and harmonized by large international programs, but scientific progress will ultimately come from the passion and ingenuity of the individual researchers.

For all these reasons, parallel to model development and scenario runs we need to focus also on the study of the “fundamentals of climate”, analyzing available data, performing new measurements, using big models and conceptual models, to explore the many fascinating and crucial processes of the climate of our planet which are still not fully understood. While continuing the necessary efforts on data collection, storage, and analysis, and the development of more sophisticated modeling tools, we also need to come up with a theory of climate. In such a construction, the role of climate dynamicists, physicists, chemists, meteorologists, oceanographers, geologists, hydrologists and biologists is crucial, but so is the role of mathematicians. A theory of climate is needed to put together the different pieces of the climatic puzzle, addressing the most important open questions, developing the proper mathematical descriptions, in a world-wide initiative to understand (and, eventually, predict) one of the most fascinating and important manifestations of Planet Earth.