The health of the world’s oceans has been in the news a lot over the last few months. Recent reports suggest that the oceans are absorbing carbon dioxide at unprecedented rates. The ocean is the dominant player in the global carbon cycle, and the sequestering of more carbon dioxide—a major greenhouse gas—sounds like a good thing. However, researchers have measured significant increases in ocean acidity, and they worry that this will have a negative impact on marine life, especially phytoplankton.

That would be a big deal, as phytoplankton, which are the foundation of the ocean food chain, are vitally important to life on Earth. They capture the radiant energy from the sun, converting carbon dioxide into organic matter, and they produce half of the Earth’s oxygen as a by-product. 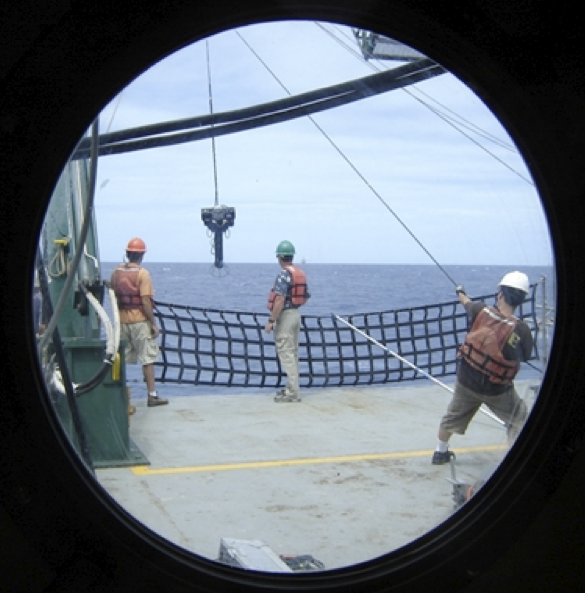 A second, more accurate and mathematically intensive approach uses special cameras lowered into the ocean to measure the radiance field in the water, both at the surface and at various depths. These measurements are then used to infer the properties of the water and its constituents. The ocean’s radiance field is determined primarily by the sun and sky and is influenced by a host of factors, including the behavior of the air-sea interface, the inherent optical properties of the water, scattering effects, etc. Determining the makeup of the water from the measured radiance distribution has proven to be a difficult inverse problem for oceanographers to solve.

The first step to solving this problem is having a precise specification of the radiance field. This provides oceanographers with the means to calculate quantities that can be used to assess phytoplankton populations. This is the subject of work by researchers Marlon Lewis and Jianwei Wei of Dalhousie University in Nova Scotia, supported by the Mitacs Accelerate internship program.

Lewis and Wei helped to develop a new camera that can be used as an oceanographic radiometer. The high resolution device makes it possible to resolve the spherical radiance distribution at high frequency at surface and at depth. Their work established the precision and reliability of the radiance camera and has provided scientists with a new tool to monitor phytoplankton populations as well as the health of the world’s oceans.