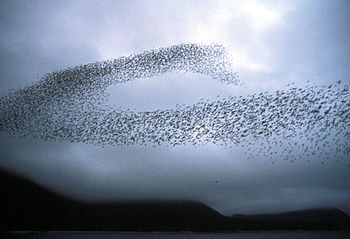 Observing collective phenomena such as the movement of a flock of birds, a school of fish, or a migrating population of ungulates is a source of fascination because of the mystery behind the spontaneous formation of the aggregating behavior and the apparent cohesiveness of the movements. However, they can also be the cause of a major environmental and social problem when one thinks, for example, of the flight of a swarm of voracious locusts ravaging crops in various parts of the world and putting many communities under severe stress.

Collective movement of animals can be defined as the spontaneous formation of animal groups and their coordinated motion. As a ubiquitous biological phenomenon, its study has intrinsic interest. But it is also critical for the design of strategies to prevent the process of aggregation of locusts before it happens, or to perturb or possibly stop its progression and the destruction of crops once it has started. On a lighter side, a dance company used the scientific study of collective behavior movements in an original initiative to bridge the gap between scientific and artistic languages.

Collective movement of animals can be modeled in a Lagrangian mode or in an Eulerian mode. The Lagrangian mode is an “individual-based” modeling strategy, where the movements of individuals are simulated under simple rules for their mutual interactions. The emerging aggregations and collective motions are observed directly. The interaction rules can be defined in terms of distances between group members or topologically in terms of a collection of neighbors, independently of distance.

In the Eulerian mode, one follows the evolution of animal densities using equations similar to those used in fluid dynamics or statistical mechanics. One makes hypotheses about the social interactions between individuals in a group in terms of repulsion, attraction, and alignment. Repulsion is strongest in a zone close to an individual, while attraction is strongest in a zone furthest from the subject. These two zones can overlap. and the alignment zone sits somewhere between the two zones. In the case of a herd of prey, individuals want to keep a comfortable distance between each other and repel the ones that are too close; on the other hand, an individual too far from the group is vulnerable to predators and will seek to get closer to the group. These social interactions are often nonlocal and can be modeled using integration of so-called interaction kernels. A typical example of an interaction kernel is a Gaussian function with its peak at the distance where the interaction is strongest. One can also define modes of communication corresponding to visual, auditive or tactile interactions and depending on whether individuals in a group move towards or away from each other. These modes of communication encode topological properties of the animal groups.

Theoretical and simulation studies with the above modeling methods help to demystify the mechanisms of collective motion. They produce new hypotheses for empirical studies and are also important in understanding and controlling insect invasions. Moreover, they have led to the development of new mathematics and improvement of numerical simulation algorithms. A better understanding of these collective phenomena does not remove any of the magic of the gracious ballet of a flock of birds; in fact, it adds to their enchantment.