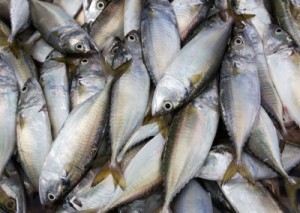 There are two standard ways to restrict harvesting of fish in order to maintain or improve the population. One way is to establish marine protected areas where fishing is prohibited and the other is to allow fishing everywhere but at something less than maximal capacity. Just a few days ago I noticed an interesting preprint in arXiv that sets up a mathematical framework for deciding whether protected areas should be used and, if so, where they should be established. The article is Optimal Placement of Marine Protected Areas by Patrick De Leenheer, who is an applied mathematician at the University of Florida.

He sets up the problem as one in optimal control theory, which provides a much broader spectrum of possible harvesting strategies by allowing a harvesting rate that varies from point to point along the one dimensional coastline. An interval over which the harvesting rate is zero corresponds to a protected area, and so there could conceivably be several protected areas separated by regions that allow some harvesting. De Leenheer proposes to maximize a weighted sum of the total yield and the average fish density:

The motivation for choosing this measure is that it incorporates two of the main measures that have been used in the past, namely yield and density, coupled with the fact mentioned earlier, that MPA’s are believed to have opposite effects on these measures.

To me it is not intuitively clear what to expect for the optimal strategy, but De Leenheer’s analysis shows that there are three possible optimal strategies that can occur. Just which one depends on the two parameters: (1) the weight given to the average density in the objective function and (2) the length of the coastline. When the weight of the average density is below a threshold, then it is optimal to allow fishing at maximal capacity everywhere. But when the weight exceeds the threshold value, then the length of the coastline comes into play. Below a certain critical value for the length parameter it remains optimal to allow fishing everywhere, but above the critical length it is optimal to install a single marine reserve in the middle of the coast line.