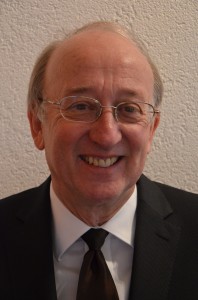 Public Lectures at the Centre de recherches mathématiques (CRM) in Montréal have a tendency to fill up quickly, even on a Friday night. All the more so on May 10, 2013, when the lecture was coupled with a round-the-clock science fair. As the large crowd gathered to hear Paul Embrechts, Professor of Mathematics at the Swiss Federal Institute of Technology in Zürich (ETHZ), everyone was wondering how he would connect the components of the title of his talk: “Königsberg’s bridges, Holland’s dikes, and Wall Street’s downfall.”

Professor Embrechts is an authority in extreme-value theory and quantitative risk management. He has written many influential books and over 150 articles on these and related topics. He has also consulted widely on risk management issues with financial institutions, insurance companies, and international regulatory agencies. The “Grande Conférence” he gave at the CRM illustrated in lay terms how mathematics can be used to help design protection against catastrophic events such as epidemics, floods, tsunamis, and financial crises by observing the natural variation of risk factors, carefully assessing the chances that they reach extreme levels, and studying how risk spreads like a contagious disease in a social or banking network.

The talk opened with the famous Königsberg bridge-crossing problem: Is it possible to find a walk through the city that would cross each of its seven bridges once and only once? Euler’s negative solution to this problem was both simple and applicable to any system of bridges, regardless of its complexity. It also pioneered graph theory as a problem-solving tool. In his lecture, Professor Embrechts showed how it is possible to use graphs to visualize the web of complex interdependencies between financial institutions and to assess systemic risk, i.e., the risk of collapse of an entire system through a domino effect caused by the failure of a single entity or cluster of entities. Using an August 2012 Nature article by ETHZ Senior Researcher Dr Stefano Battiston and his collaborators, Professor Embrechts showed how statistical and graph-theoretic tools can be used to describe the growth of systemic risk during the sub-prime mortgage crisis, to the point where a single default was more likely than ever to trigger a cascading failure.

Conceptually, protecting financial institutions from insolvency is not unlike defending the North Sea lowlands against floods and storm surges. Bank regulators in many countries around the globe are now requiring financial institutions to set aside adequate capital reserves to guard against potentially large monetary losses. These financial reserves play essentially the same role as a system of dikes on a coastline. After the catastrophic flood of 1953, the Dutch government commissioned the construction of major protective works. Taking into account cost and feasibility constraints, the Delta Works Commission fixed an acceptable flooding risk for each endangered region. In South Holland, for example, dikes were planned to fail no more than once in 10,000 years on average. But how is it possible to assess such a risk in the absence of records dating back long enough to observe the actual magnitude of a 10,000-year flood? Professor Embrechts explained that extreme-value theory plays a crucial role in allowing us to extrapolate beyond the level of observable data. An interesting twist to the story is that the initial impetus and much of the seminal work in this field is due to mathematicians and statisticians who grew up close to the North Sea — Guus Balkema, Jan Beirlant, Laurens de Haan, John Einmahl, and Jef Teugels are but a few of the Belgian and Dutch extreme-value specialists mentioned by Professor Embrechts. He himself was born soon after the 1953 flood in the vicinity of the impacted area.

In finance, the bestselling books of Nassim Nicholas Taleb have popularized the expression “black swans” for hard-to-predict rare events of large impact. No wonder extreme-value theory also plays a role in predicting, assessing and guarding against such events in the financial sector.

It never rains but it pours. Just as extreme floods often strike several areas, stock prices tend to rise or drop together, and it can very well happen that several obligors default simultaneously. Failure to properly account for such interdependencies may lead to serious underestimation of risks and can even trigger major financial crises. In 2009, the popular press began to attribute the downfall of Wall Street to a single mathematical formula that was used by “quants” to model the probability of joint credit defaults. In Professor Embrechts’ own words, “this is akin to blaming Einstein’s $E = mc^2$ formula for the destruction wreaked by the atomic bomb.” That academics should be held responsible for the crisis is all the more ironic, given that many of them frequently spoke of the limitations of mathematical tools used in the financial sector. As early as 1998, Professor Embrechts and his collaborators had warned that the formula that allegedly “killed Wall Street” is inadequate because it fails to account for the joint occurrence of extreme events.

As the crowd gathered for a glass of wine after this inspiring lecture, many people in the audience no doubt pondered over Professor Embrechts’ final message. Written in large letters on his last slide was a single word: “Communiquez!” Good science and good practice go hand in hand, he insisted; they require constructive dialogue. Mathematical models and statistical methods are increasingly powerful but also increasingly complex. If these tools are to be used successfully and safely, warnings from academia should not be dismissed as irrelevant babble from ivory-tower daylight dreamers. All the same, the world can no longer afford the blissful scientist who is pleasantly portrayed by American musical satirist Tom Lehrer when he sings:

“Once the rockets are up
who cares where they come down
that’s not my department,
says Wernher von Braun.”