When I was at the hardware store the other day buying a replacement for a burnt out light bulb I saw the array of LED bulb options. It seems like people have been saying for a decade or more that the world of LED lighting is right around the corner and that the change brought about by the LED revolution will be the most significant lighting event since Thomas Edison. That’s a pretty tall claim, given that the light bulb is synonymous with innovation and its introduction heralded a new era.

Nonetheless, it got me thinking about the realities and the potential of LED lighting. Roughly 20% of the North American energy budget goes towards lighting. That’s a large fraction, and most of that energy is wasted, lighting empty rooms and hallways and producing heat where we only want illumination. It’s an inefficiency calling for some kind of optimization.

LED technological innovation has followed Haitz’s law (the LED equivalent of Moore’s law), where illumination has risen by 20X and costs decreased by 10X each decade. LEDs are finally ready for the big stage, and the lighting industry estimates that LEDs will represent 80% of the illumination market within the next seven years. If you consider that the average U.S. home has 52 light sockets (more than four billion nationwide) and that there are nearly a trillion light sockets for all uses worldwide, you’re talking about a major change in the way we light our world.

The changes go beyond replacing one bulb type with another. Having an illumination source that turns on and off instantly with no warm up makes it efficient to integrate lights and sensor networks so that we only illuminate what we want. Mitacs, through our Accelerate internship program, is supporting research in this area through the development of low power wireless sensor networks integrated with lighting and heat control. Trials in this project have found that lighting costs can be reduced by up to 90%. 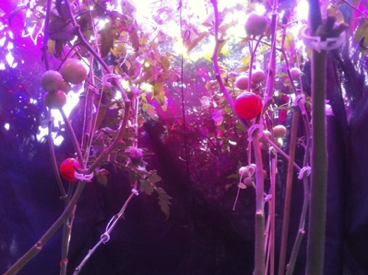 It’s not just households who will benefit from LED lighting. The ability to design LEDs with particular wavelengths makes them a great fit for agriculture, where the spectral composition of light is a major determinant of plant yield. Photosynthesis requires blue and red light, wavelengths where the best current technology, high pressure sodium lamps, is weak. Mitacs supported researchers at McGill University who are developing new LEDs that maximize plant growth while minimizing energy costs. From this research we learn more about how to optimize the light spectrum through the various plant development stages to grow crops using far less energy.