The National Museum of Natural History and Science of the University of Lisbon, Portugal, has added several new and significant displays to the exhibition Forms and Formulas in the framework of the Portuguese activities for MPE2013. Highlight is the winning entry of the MPE2013 competition, The Sphere of the Earth, an interactive module created by Daniel Ramos (Spain). The module uses Tissot indicatrices to show the deformations of the Earth’s surface that occur in six map projections, illustrating the impossibility of a “perfect map” of the Earth. 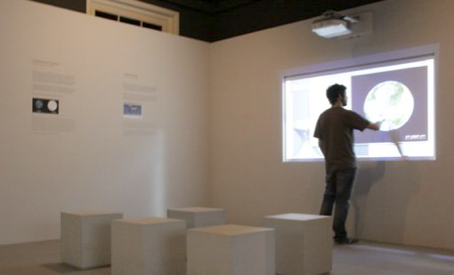 This mew exhibit enlarges the component “Images and Visualizations” of Forms and Formulas, which recreated part of IMAGINARY as an open and interactive mathematical exhibition. The enlargement contains two new modules which were also shown at the UNESCO exhibition in Paris last March, namely the interactive application Rhumb Lines and Spirals, about planar projections of modern loxodromes and great circles (shortest distance between two points on a spherical surface) whose difference was found by Pedro Nunes in 1537, and the film Sundials, Mathematics and Astronomy which focuses on aspects such as measuring distances in celestial bodies and the difference between solar time and legal time.

The exhibition is open until the end of September. As the title indicates, it shows the connection between geometrical forms and algebraic formulas via interactive models, day-to-day objects and architectural forms. The relationship between mathematics and other areas related to MPE2013 is enhanced by a series of monthly conferences and informal dialogs with invited speakers from different scientific disciplines. The next talk is scheduled for June 6, when the architect João do Carmo Fialho will focus on geometric forms with soap and water.