Recently, while preparing a chapter on the Mauna Loa CO${}_2$ data for a forthcoming book [1], I came across an interesting article by Euan Nisbet in Nature [2]. The article was written in 2007, on the occasion of the 50th anniversary of the measurement program responsible for the longest continuous recording of atmospheric carbon dioxide. 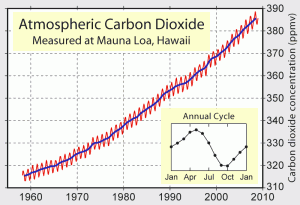 Looking back, the “Keeling curve” of CO${}_2$ concentrations ranks among the most significant achievements of twentieth-century science. It established the connection between rising atmospheric CO${}_2$ concentrations and fossil-fuel burning, and provided conclusive evidence that a substantial fraction of the CO${}_2$ released by humans into the atmosphere was not removed by the biosphere. The Keeling curve changed our view of the world.

But the perspective at the time was quite different. Monitoring is science’s Cinderella, unloved by the scientific community and poorly rewarded. It does not win glittering prizes, and publication nowadays is most often relegated to a Web site. Charles David Keeling’s 1960 paper [3] documenting the seasonal cycle and, more ominously, the annual rise in CO${}_2$ garnered citations slowly. The account of his tribulations, “Rewards and Penalties of Monitoring the Earth” [4], should be compulsory reading for politicians and science administrators. His work was often threatened, as is attested by a gap in the data in 1964 when underfunding briefly halted the measurements. At one point, his program managers ordered Keeling to guarantee two discoveries per year!

in hindsight, Keeling was ahead of his time. He realized that, if we want to learn more about Earth’s climate system, we need more than models—we need data to test and improve our models. Mathematics owes a great deal of debt to the Cinderella scientists.