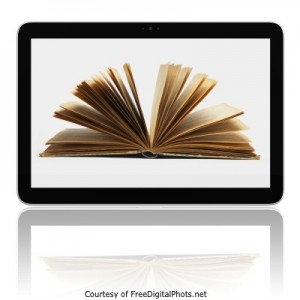 Compared with a conventional textbook it’s obvious that an e-text saves energy and reduces greenhouse gas emissions—or is it?

When you actually look at the way students use both kinds of textbooks the obvious turns out to be not so obvious. Looking at the behavior of college students is exactly what Thomas F. Gattiker, Scott E. Lowe, and Regis Terpend did in order to determine the relative energy efficiency of electronic and conventional hard copy textbooks.

They used survey data from 200 students combined with life cycle analysis of digital and conventional textbooks and found that on the average the carbon footprint for digital textbooks is a bit smaller but not as much smaller as you would hope.

In a short summary article for The Chronicle of Higher Education, Gattiker and Lowe write:

“We discovered that when we consider all greenhouse-gas emissions over the life cycle of the textbook, from raw-material production to disposal or reuse, the differences between the two types of textbooks are actually quite small. Measured in pounds of carbon-dioxide equivalent (CO2e), a common unit used to measure greenhouse-gas emissions, the use of a traditional textbook resulted in approximately 9.0 pounds of CO2e per student per course, versus 7.8 pounds of CO2e for an e-textbook.”

However, there is a wide variability in the energy used by individual students, and the reasons are easy to understand. Some of the factors that matter are:

They identify three “levers” that college faculty and students can use to reduce the carbon load associated to textbooks: