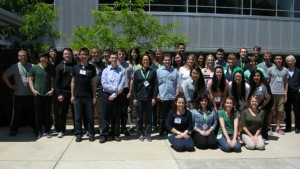 During the week of May 13, 2013, thirty-four students from around the United States attended the Statistical and Mathematical Sciences Institute (SAMSI) Undergraduate Modeling Workshop. On the first day, students had an opportunity to learn about tropical storm formation and hurricane forecasting from Dr. Carl Schreck, a researcher at the Cooperative Institute for Climate and Satellites North Carolina. They also heard talks from a statistician, Dr. Richard Smith, the Director of SAMSI, and a mathematician, Dr. Chris Jones from the University of North Carolina, both involved with climate research. Later in the week, the students also attended a talk by Dr. Montserrat Fuentes, from the Department of Statistics at North Carolina State University, on statistical methods for studying pollution.

For the bulk of the week, the students worked on modeling and analyzing hurricane prediction data acquired from the database used by researchers at NCSU to forecast characteristics of each year’s hurricane season. Students got an introduction to the database and also the opportunity to use climate data products to update entries in the database. After understanding how the data were acquired and ‘cleaned up’, various SAMSI post-docs and graduate fellows gave tutorials on Poisson regression and its implementation using R to predict the number of landfalls along the eastern US for the 2013 hurricane season. On the final morning, students gave their presentations, many of which are available on the SAMSI website.

Dr. Carl Schreck, from the Cooperative Institute for Climate and Satellites North Carolina, attended the presentations. The following are his comments about the workshop:

“As an atmospheric scientist focused on the Tropics, participating in SAMSI’s recent Interdisciplinary Workshop for Undergraduates was a fascinating experience. Math and statistics students from all around the country were tasked with developing statistical models to predict the number of tropical storms and hurricanes that would make landfall in the United States this summer. My role was to give them an overview of how hurricanes form and how climate signals might be used to predict their seasonal activity. I was very impressed by the depth of the questions they asked me. Even though the material was outside of their comfort zones, they were clearly eager to embrace it.

At the end of the workshop, each group of students presented their forecasts and methodologies. The climate signals they used as predictors are available as monthly averages going back to 1950. The students showed great innovation in how they average multiple months to stabilize predictors. Their solutions ranged from a simple average of the three most recent months to a 12-month weighted averaging scheme that put more emphasis on the most recent values.

The students also showed great creativity in how they selected their predictor signals. Some chose predictors based on physical understanding of how they might affect hurricanes, while others let the data guide them to whatever predictors had the strongest statistical relationships. Their forecasts for 2013 ranged from 4 to 10 tropical storms making landfall this year, with the consensus or average around 6. I’m looking forward to seeing how well those forecasts verify!”

Mr. Lee Richardson, a participant from the University of Washington at Seattle, shares his experience of the workshop:

“I spent last week at North Carolina State University, at an undergraduate workshop that focused on modeling hurricanes that would hit America in 2013. I didn’t know what to expect going in, as this was the first workshop style event I have ever attended. The week turned out to be one of the most inspiring/interesting/helpful weeks of my life. Not only did we have very current data to address a significant real world problem, but the people I met were very interesting and helpful as well. It was refreshing to spend a week with people who were also passionate about statistics, and being able to ask post-docs and others for help whenever we got stuck looking at the data was invaluable.

Another thing that was great about the workshop was how many prestigious, and successful people from the statistical/mathematical world were there to give us advice and talks on their research. Getting perspectives on the state of statistics, climate statistics, and graduate school from people who are very experienced in these fields was enlightening. While I already had spent a good amount of time reading about graduate school, I can safely say that after attending this workshop I am wholly more prepared to pursue statistics graduate school and very excited about being a part of the future of Statistics.”

“This year’s undergraduate modeling workshop was a lot of fun for me. I always enjoy interacting with the undergrads who pass through SAMSI, who bring a level of enthusiasm and energy that I remember having when I was that age. It’s nice to be able to pass on advice to the next generation of math/stats students. I think the theme of this year’s program, hurricane prediction, was a great test case for the students to work on. The data are easy to understand and collect, and there were enough degrees of freedom in making modeling decisions that every group was able to do something different and defend their choices at the end of the workshop. I hope that this exposure to the research process will pique the interest of at least one student who might not otherwise have been considering graduate school in the mathematical and statistical sciences.”

“I was impressed with the caliber of the undergraduates who attended the modeling workshop. I loved hearing students throughout the week say, `I’ve never considered graduate school, but now I must go. There’s so much more about statistics that I want to learn.’ My favorite part of the workshop was watching each group present their final results. It was obvious that the students found the hurricane data interesting and fun to work with, and the presentations were all engaging and informative. The students learned how to apply Poisson regression to predict hurricane counts given environmental predictors from previous years. Most groups used stepwise selection with an AIC or BIC criterion to build a model, and some groups wrote their own R code to assess their models using cross-validation. The workshop offered a unique experience that will inspire and benefit the students for years to come!”

The workshop was part of the Mathematics of the Planet Earth 2013 (MPE2013) program at SAMSI.