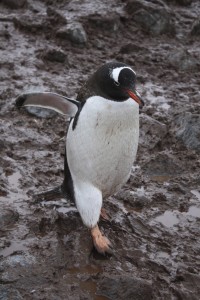 I was traveling with an alumni group from St. Olaf College led by Physics Professor and Geophysicist Robert Jacobel, who had traveled to Antarctica numerous times to do ice radar and remote sensing research, most recently with the Whillans Ice Stream Subglacial Access Research Drilling (WISSARD) project in West Antarctica.* In addition to Jacobel’s expertise on glaciers and ice, the NG Explorer was staffed with numerous naturalists with expertise in Antarctic marine mammals, sea birds, underwater creatures, global climate dynamics as well as the history of Antarctic exploration in general. As an applied mathematician who has studied fluid dynamics, solidification/melting and mushy layer formation in aqueous systems computationally and in the lab, the opportunity to see first hand Antarctica’s version of these proceedings was very exciting. I was in the Earth’s cold lab getting a guided tour of science in action. 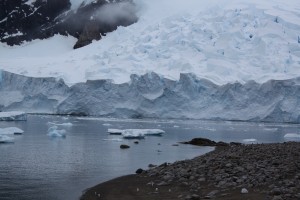 From a purely touristic point of view the Antarctic peninsula, via the comfortable NG Explorer, was a fabulous place to travel. Each day greeted us with a new experiences that stimulated the senses — sights of vast glaciers and countless icebergs, the up-close sounds of humpback whales surfacing to breathe alongside our Zodiac, the smell of a Chinstrap penguin colony, the endless rocking motion crossing the Drake Passage, and the chilling sensation of a quick dip in the sheltered waters of Deception Island. Maybe not Shackleton’s exact experience — I would not have minded getting beset in ice to extend our time down there a bit longer — but its the spirit of adventure and discovery that counts.

At the same time, as an applied mathematician I felt immersed in a very unique laboratory environment. I found myself sitting in the midst of a penguin colony and watching the adults defend their chicks from skuas, work tirelessly building rock nests one carefully-selected rock at a time, or go out in search of everyone’s favorite biomass – Euphausia superba, Antarctic krill. I want to write down a population dynamics model for a penguin colony, calculate krill consumption factors, couple it to predatory leopard seals and skuas and factor in rare events such as an ill-timed snow storm that may determine the success of failure of the entire colony’s breeding season. Then I get distracted by a giant chunk of ice that calves from a glacier and I start thinking about ice sheets, ice shelves and grounding lines. A penguin waddles by and I snap a photo. He smells like krill. I wonder what it is about sea ice that the krill like so much. Maybe they know something about mushy layers that I do not.

There is a great history of scientific research in Antarctica and applied mathematicians have certainly made important contributions. Readers of this blog will already know about previous entries by Hans Kaper: Mathematician stepping on thin ice (January 12, 2013) and by Robert Bryant: From the JMM – Porter Lecture by Professor Ken Golden (January 13, 2013). As an interested reader I would like to bring a few other contributions to your attention. I know I am biased but to me there is nothing more quintessentially applied math than the method of matched asymptotic expansions. An excellent example of this in the context of marine ice sheet dynamics can be found in papers by Christian Schoof [Marine ice-sheet dynamics. Part 1. The case of rapid sliding. Journal of Fluid Mechanics 573 (2007) 27–55 and Marine ice sheet dynamics. Part 2. A Stokes flow contact problem. Journal of Fluid Mechanics 679 (2011) 122–155]. In fact, there has been a lot of applied mathematics activity in the area of ice-sheet, ice-shelf and grounding-line dynamics. The ice sheets covering West Antarctica, which motivate many of these studies, rest on bed rock below sea level and consequently play a particularly important role in the global climate dynamics picture.

Having spent some time sitting and watching penguins and their infinitely interesting behaviors I was interested to see in the recent literature a contribution from a group of applied mathematicians on the huddling behavior of penguins [A. Waters, F. Blanchette and A.D. Kim, Modeling Huddling Penguins, PLOS ONE 7 (2012) e50277]. This fluid and heat transfer model incorporates a penguin-behavior component to test the idea that penguins huddle to reduce their exposure to the cold.

Despite the grandness, importance and allure of a place like Antarctica, there is no shortage applied mathematics opportunities closer to home. The previous bloggers have highlighted many of these. May we all find opportunities to make 2013 a successful year for our planet.

The views presented here are those of the author and do not necessarily represent the views of policies of NIST.

*For those of you interested in reading blogs check out the WISSARD Blog Site.