The ship drove fast, loud roared the blast,
And southward aye we fled.

And now there came both mist and snow,
And it grew wondrous cold:
And ice, mast-high, came floating by,
As green as emerald.

And through the drifts the snowy clifts
Did send a dismal sheen:
Nor shapes of men nor beasts we ken–
The ice was all between.

The ice was here, the ice was there,
The ice was all around:
It cracked and growled, and roared and howled,
Like noises in a swound!

Coleridge’s ancient mariner voyaged to the southern seas around what we now call Antarctica. Beneath the ice pack around the continent that he describes so vividly, the BBC recently filmed for the first time the growth of a strange tube of ice hanging down into the ocean from the floating ice. They entitled their fascinating film “‘Brinicle’ ice finger of death”. You can see why if you watch it here. When the brinicle touches the sea floor, it entombs all it touches, including starfish and sea urchins, in ice.

I saw that amazing brinicle footage at the end of 2011 when I was busy writing up a large ice physics review paper. I included in it the bibliography I found on ‘ice stalactites’ or brinicles, from the 1970s; there wasn’t much. 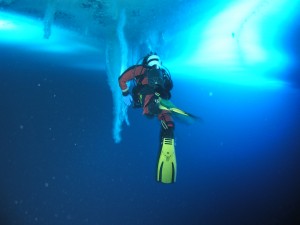 A diver observes brinicles under the Antarctic ice pack (thanks to Rob Robbins, Hubert Staudigel, and the US Antarctic Program for the picture).

As well as the physics of ice, I’m also investigating another example of wonderful patterns in nature: chemical gardens. You may, like me, have played with making these strange crystal growths as a child; my chemistry set contained all the ‘ingredients’ -or, as a chemist would say, reagents- to make them.

Chemical gardens also form tubes, like brinicles, although generally at a much smaller scale. I realized that these brinicle ice tubes could be seen as a form of chemical garden growth, and with my colleagues Bruno Escribano, Diego Gonzalez, Ignacio Sainz, and Idan Tuval I developed the idea. The key to understanding how they grow is that the process depends on salt. As their name implies, brinicles form from briny water – Coleridge reminds us in one of the most famous lines of the Ancient Mariner that the seas are not pure water, but salty brine:

“Water, water, every where,
Nor any drop to drink.”

We worked out the mechanisms of the brinicle formation process, which turns out to have basically the same physics as chemical gardens in the laboratory, and we have just published a paper about this. 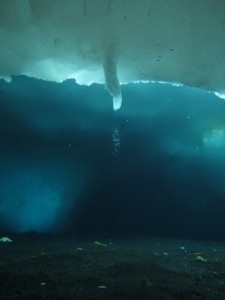 Brine emerging from the tip of the tube of a growing brinicle (again thanks to Rob Robbins, Hubert Staudigel, and the US Antarctic Program for the picture).

Brinicles are fun things to think about, but they also have broader implications. On one hand, as heat flows through them, they contribute to the energy balance in the ice pack around Antarctica. We need better mathematical models of this ice pack, to be able to know how it’s affected by climate change. And, to build a better model, one needs to know about brinicles.

On the other hand, there’s a lot of work going on at the moment to understand the origins of life. Many people are working on a promising theory of life’s beginnings in the hot environment of hydrothermal vents on the ocean floor. But perhaps brinicles provide a cold alternative? There are many parallels in terms of energy sources between so-called black smokers on the ocean floor and brinicles in cold environments. One of my colleagues, Hauke Trinks, has spent several winters in Svalbard looking at complex chemistry in sea ice, which is relevant for the origins of life in the cold.

So might brinicles on the early Earth have played a role in the beginnings of life? What would the ancient mariner have made of that idea?