Today’s blog is an update on a story that was in the news earlier and also some comments on a recent article in the New York Review of Books. (See the blog of 4.11.2013.)

The E.O. Wilson story about math and science generated much discussion. David Bailey and Jonathan Borwein wrote a nice column on “The Blog” on the Huffington Post site in response to the Wilson article. They quote Darwin in the last paragraph:

“During the three years which I spent at Cambridge my time was wasted, as far as the academical studies were concerned, as completely as at Edinburgh and at school. I attempted mathematics and even went during the summer of 1828 with a private tutor (a very dull man) to Barmouth, but I got on very slowly. The work was repugnant to me, chiefly from my not being able to see any meaning in the early steps in algebra. This impatience was very foolish, and after many years I deeply regret that I did not proceed far enough at least to understand something of the great leading principles of mathematics, for men thus endowed seem to have an extra sense.” (Charles Darwin)

Recall that Wilson said that Darwin did not need much math and developed his theories through the power of observation. 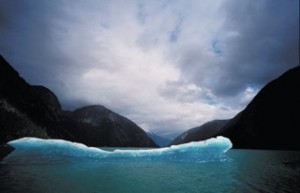 A melting iceberg from the South Sawyer Glacier in the Tracy Arm Fjord, near Juneau, Alaska. (From the article by Bailey and Borwein)

The May 9th issue of The New York Review of Books has an interesting review, called “Some Like It Hot” by Bill McKibben of three recently published reports about climate change. The first is “Climate and Social Stress: Implications for Security Analysis.” McKibben, founder of 350.org, points out that the report warns of risk to water supplies and the risk of famine and has a particular focus on yellow fever and public health risk. The second report is from the World Bank, “Turn Down the Heat: Why a 4º C Warmer World Must Be Avoided.” The focus of this report is on how the rise in temperature will make life impossible for many, especially the poor, and the effect on productivity. The final piece reviewed is a report called “The Collapse of Western Civilization: A View from the Future” by Naomi Oreskes and is a fictional account of a report looking back form 2373 and lamenting the failure of of our governments to act on climate change in the present time, “a second Dark Ages had fallen on Western civilization, in which denial and self-deception, rooted in an ideological fixation on ‘free’ markets, disabled the world’s powerful nations in the face of tragedy.”

The review is not optimistic about the future but worth reading.