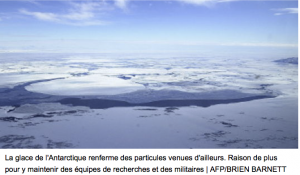 It is well known that sea ice has a significant influence on the Earth’s climate system. Sea ice is highly reflective for incident radiation from the Sun, and at the same time it is a strong insulator for the heat stored in the upper (mixing) layer of the ocean. While global warming causes Arctic sea ice to melt at a measurable and significant rate, sea ice surrounding Antarctica has actually expanded, with record extent in 2010. How can this somewhat paradoxical behavior be reconciled with global warming? Various explanations have been put forth. Usually, the expansion of the Antarctic sea ice is attributed to dynamical atmospheric changes that induce atmospheric cooling. But the authors of the paper present an alternate explanation, which is based on the presence of a negative feedback mechanism.

The authors claim that accelerated basal melting of Antarctic ice shelves is likely to have contributed significantly to sea-ice expansion. Observations indicate that melt water from Antarctica’s ice shelves accumulates in a cool and fresh surface layer that shields the surface ocean from the warmer deeper waters that are melting the ice shelves. Simulating these processes in a coupled climate model they found that cool and fresh surface water from ice-shelf melt indeed leads to expanding sea ice in austral autumn and winter. This powerful negative feedback counteracts Southern Hemispheric atmospheric warming. Although changes in atmospheric dynamics most likely govern regional sea-ice trends, their analyses indicate that the overall sea-ice trend is dominated by increased ice-shelf melt. Cool sea surface temperatures around Antarctica could offset projected snowfall increases in Antarctica, with implications for estimates of future sea-level rise.

The problem offers a nice challenge in mathematical modeling. The abstract of the paper can be viewed here. The full text is behind a paywall on the same Web site.