Could the cold weather experienced this winter in the northern part of the Eurasian continent be related to the decrease in Arctic sea ice? This question is the subject of much debate in the media in Europe. This post shows some relevant weather maps and links to several relevant blogs and articles.

First, what does the unusual temperature distribution observed this March actually look like? Here is a map showing the data (up to and including March 25, NCEP / NCAR data plotted with KNMI Climate Explorer): 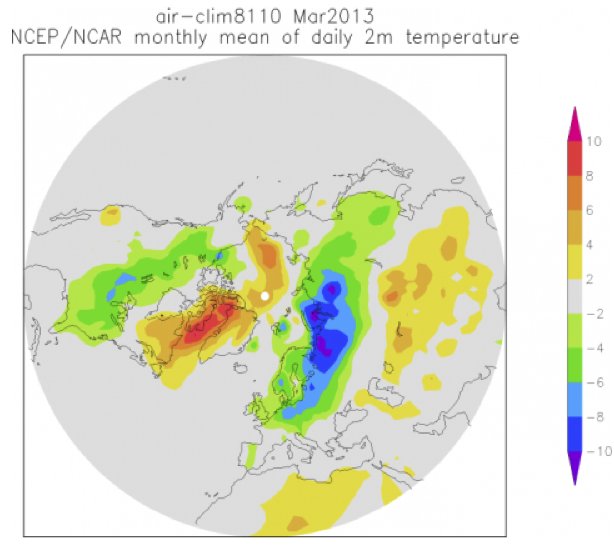 Freezing cold in Siberia, reaching across northwestern Europe, unusually mild temperatures over the Labrador Sea and parts of Greenland and a cold band diagonally across North America, from Alaska to Florida. Averaged over the northern hemisphere the anomaly disappears – the average is close to the long-term average. Of course, the distribution of hot and cold is related to atmospheric circulation, and thus the air pressure distribution. The air pressure anomaly looks like this: 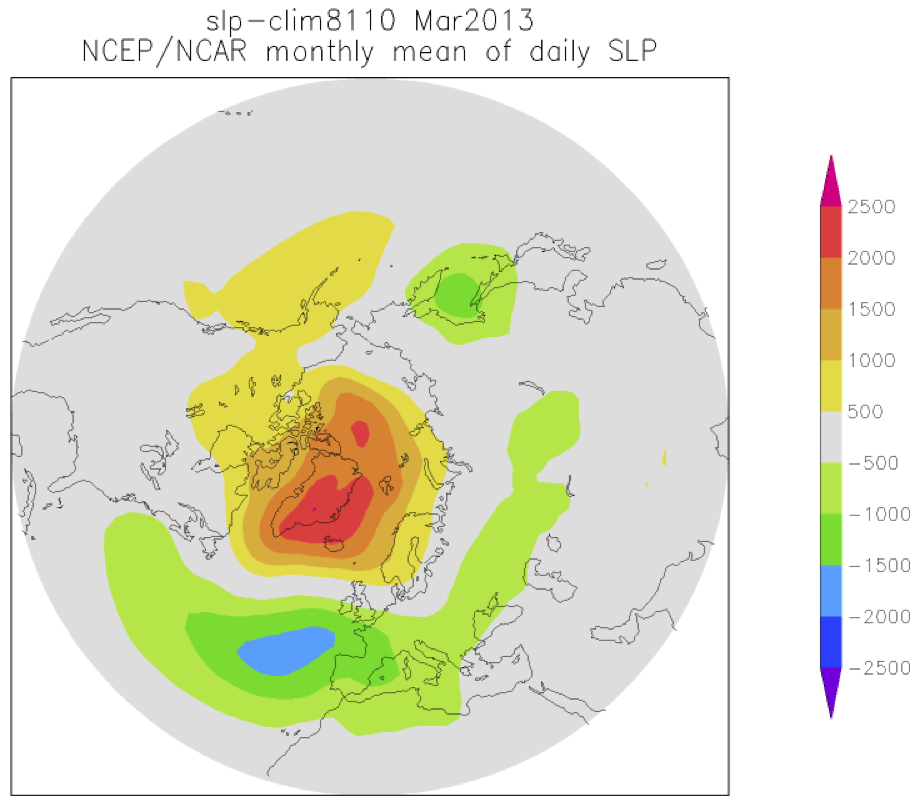 There was unusually high air pressure between Scandinavia and Greenland. Since circulation around a high is clockwise [anticyclone], this explains the influx of arctic cold air in Europe and the warm Labrador Sea.

Let us now discuss the Arctic sea ice. The summer minimum in September set a new record low, but also at the recent winter maximum there was unusually little ice (ranking 6th lowest – the ten years with the lowest ice extent were all in the last decade). The ice cover in the Barents sea was particularly low this winter. All in all, until March the deficit was about the size of Germany compared to the long-term average.

Is there a connection with the winter weather? Does the shrinking ice cover influence the atmospheric circulation, because the open ocean strongly heats the Arctic atmosphere from below? (The water is much warmer than the overlying cold polar air.) Did the resulting evaporation of sea water moisten the air and thus lead to more snow?

Here are links to some blogs where this problem is discussed: Neven Blog, Rabett Blog, SciLogs.