March 11 marks the second anniversary of the 2011 9.0 earthquake with epicenter located off the coast of Japan, which caught the world—including expert seismologists—by surprise. It was a stark reminder of how much is still unknown about faults and their sudden, catastrophic, behavior. Finding the precise geometry of faults and mapping existing strain fields in surrounding areas is still an open and very challenging problem. If we could overcome this challenge, we could run simulations of seismic activity and thus better assess risk in given areas.

With my collaborator I. R. Ionescu (University of Paris), we have developed (Inverse Problems, 25, 1 (2009)) a robust method for locating and portraying faults that are active due to tangential dislocations. This was done under the assumption that only surface observations are available and that a traction-free condition applies at that surface.

We also explored the possibility of detecting slow slip events (such as silent earthquakes, or earthquake nucleation phases) from GPS observations. Our study relied on an asymptotic estimate for the observed surface displacement. This estimate was first used to derive what we called the moments reconstruction method. Then it was used for finding necessary conditions for a surface displacement field to have been caused by a slip on a fault. These conditions led to the introduction of two parameters: the activation factor and the confidence index. They can be computed from the surface observations in a robust fashion. They indicate whether a measured displacement field is due to an active fault.

We then inferred a combined reconstruction technique of fault profiles blending least-square minimization and the moments method. We carefully assessed how our reconstruction method is affected by the sensitivity of the observation apparatus and the stepsize for the grid of surface observation points. The maximum permissible stepsize for such a grid is computed for different values of fault depth and orientation. Finally we trained our numerical method for reconstructing faults on synthetic data.

The mathematical analysis of the forward and inverse problem for this quasi-static fault slip problem is now complete. We are currently working on applying that theory to minute displacements data measured on a vast area around the central Pacific coast of Mexico. This is quite a challenging step of our project since we have to contend with noisy, error-tinted data, which also happens to be severely sparse due to the high cost of apparatus capable of resolving displacements of a few millimeters per month. A reliable reconstruction of an active fault around that subduction zone in Mexico can only be achieved through the combination of a sound mathematical model of stresses and displacements of the Earth’s crust, and given physical bounds on parameters to be recovered. These bounds are known to geophysicists thanks to two centuries of observations and field work. 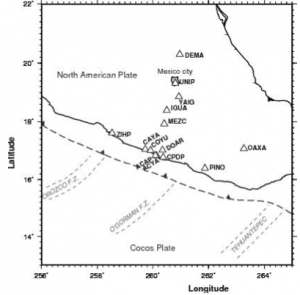 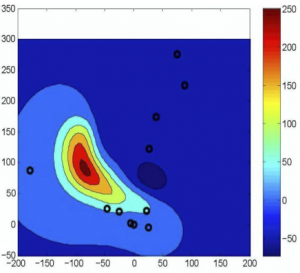 Reconstructed vertical displacements in mm (work in progress). The green circles correspond to the GPS stations.

So could geophysicists some day be able to predict seismic events? Unfortunately, earthquake prediction may never be as reliable as, say, weather prediction. At best we will some day in the future be better at assessing the probability that a given region may suffer from an earthquake in the next 100 years. That said, knowing the precise geometry of faults together with a profile of stresses in a given area may be helpful in predicting the magnitude and the waveform of future seismic events.