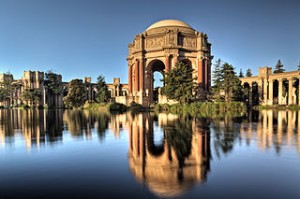 On Monday, March 4, Emily Shuckburgh delivered the second of the MPE2013-Simons Public Lecture Series talk, “Climate disruption: what math and science have to say” at the Palace of Fine Arts in San Francisco. Nearly 800 people attended the lecture (tickets were sold out) with a nice mix of mathematicians and the general public.

Here are the reflections of one of the attendees, Alison Hawkes, a freelance reporter based in San Francisco, and also the online editor of BayNature.

“What I learned most from Emily Shuckburgh’s talk was her approach towards meshing field observations with mathematical models on climate change, and how the two combined can create a more robust set of predictions about the Earth’s future. So often you hear about the recent results from the field in some new study, but understanding more how that gets fed into the underlying math and physics of the world’s climate system is fascinating.

She also presented some, quite frankly, frightening graphs of the Earth’s future under differing scenarios of greenhouse gas emissions. The graphs show, like nothing else, what a stark choice we have to make about living with the outcomes of our collective decision on what we do about climate change. And Shuckburgh’s portrayal of the timeline of these outcomes — a child born today will live in this future — really drove the point home that this isn’t just an academic debate, rather there is an enormous human dimension that we can measure in the lives of our children and grandchildren.”