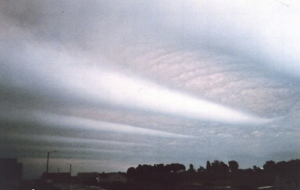 Though waves of one sort or another are a ubiquitous part of our daily experience (think of the light from your screen or the sound from your kids in the other room), we have to get on with our lives, and therefore tend not to think of the wavelike nature of daily phenomena. Those fortunate among us who can escape to the shore on a hot August week can then take the time to observe the sea and the waves she sends us.

Sitting by the shore we watch these waves rise, as if out of nothing, break, and then crash on the beach. We see a slow, nearly periodic pattern in the swell punctuated by a burst of white water. In fact, for most of us, the word “wave” evokes this wave, the oceanic surface, shallow water, gravity wave. Among all waves, it is in this phenomenon that we are able to observe (in fact experience) most of the properties of a wave. We see its wavelength, its crest and its trough and we can hear its period by listening to the breakers.

However, what we often do not see is the origin of the wave. Far out in the ocean, storms generate strong winds which raise and depress the ocean surface, thereby generating waves. As surfers are well aware, these waves travel thousands of kilometers and ultimately release their energy on the coastlines. What we do see, but may not realize, is that the breaking of the wave ultimately releases the wave energy in a manner that cannot be re-injected into the wave. It splashes, sprays and erodes the shoreline, thereby dissipating its energy. Furthermore, the wave height, itself, changes as the wave enters shallower water – which is why, from the shore, waves appear to grow from the ocean as if from nothing.

Imagine standing at the eastern edge of a California bay and staring west at the Pacific Ocean as waves from tropical storms are rounding the point at the southern end of the bay. If we want to calculate the coastal erosion associated with these waves, we need only know some aggregate properties of the waves; wavelength, height and average frequency of occurrence should suffice. However, if we want to determine the best surfing times, we need to know the timing of a particular tropical storm and its energy – thereby knowing the properties of the waves it produces and what time to be on the water in order to catch them. If storm systems appear in the North Pacific at the same time as tropical Pacific storms, then the waves from both systems will interact and break in a wholly different manner on the California coast than if the storm systems had not coincided.

The atmosphere contains waves which are very much similar to the oceanic gravity wave. They are called “internal gravity waves” because they occur throughout the depth of the weather layer of the atmosphere, not just at its upper surface. We experience these waves as pressure and wind undulations with very low frequencies – wind blows from the east one day, from the west the next day and from the east again the following day. Gravity waves exist on a wide variety of wavelengths, from meters to kilometers to thousands of kilometers. In the grossest sense, they are all generated in the same manner; something pushes the air up.

The most interesting phenomena that push the air up are thunderstorms – also known as atmospheric convection. Moist air is lifted up to a height where the air is colder and the water begins to condense, releasing its latent heat and forming a cloud. This is the opposite of what occurs in a humidifier, where water is heated in order to evaporate it and moisten the air. In the atmosphere, as the heat is released the air warms and becomes less dense than its surroundings, thereby rising into a cooler environment and causing it to condense even more. Under the right conditions, this becomes a runaway process whereby the condensation continues and the cloud rises until it hits the top of the weather layer; the tropopause. As the air rises and the thunderstorm forms, ambient air is being sucked into the bottom of the cloud while the top of the cloud is pushing air away from it. This process is highly agitating to the atmosphere and generates a gravity wave. This is not unlike a pebble falling into a pond and generating a surface water gravity wave.

However, the atmospheric gravity wave differs from the surface water wave in a very crucial way. As the wave travels away from the thunderstorm which generated it, it raises moist air, thereby cooling it and initiating condensation and, possibly, another thunderstorm. Thunderstorm cells cluster around one another so that, in the words of Brian Mapes, convection tends to be gregarious.

Just as the gravity waves occur on many length scales, so too does this organization. On the largest scales, thunderstorm systems over the Indian Ocean generate gravity waves with six thousand kilometers longitudinal extent. These are called equatorial Kelvin waves and they travel eastward along the equator for twenty thousand kilometers until they hit the Andes of South America. Along the way they excite thunderstorm activity along the whole equatorial Pacific Ocean.

From time to time, these Kelvin waves encounter other kinds of waves (Rossby waves) coming from the North Pacific and when they do, warm, moist, tropical Pacific air is channeled toward the western United States. In turn, this air sends storms and rain across the North American continent. So, in order to predict weather over the U.S. we have to carefully observe what is happening over Alaska and the Indian Ocean several days prior.

Kelvin waves move fast, and computer simulations of climate have yet to accurately simulate them. Just as understanding coastal erosion does not require detailed knowledge of the timing of surface waves, simply their aggregate properties, so too, predictions of climate change are not affected by the details of atmospheric waves, since we have a good understanding of their average properties.

But surfers need to know the timing of the waves – both from north and south. So too, in order to improve weather forecasts and to understand of how climate change will modify weather, we must understand atmospheric waves. How often do tropical Kelvin and North Pacific Rossby waves coincide? Under what conditions will they interact to cause storm systems? How do these waves interact with the ocean and thereby change the moisture of the air in which they travel? Least understood of all, what will happen to these wave interactions as our climate changes? Just as there is energy in the ocean surface waves that must be deposited on some coastline, so too there is energy in moist tropical air that must be released somewhere in the form of rain; somewhere other than where it is being released now. This means that the pattern of rains will change for the whole Pacific basin, which is all the more concerning for places like California.