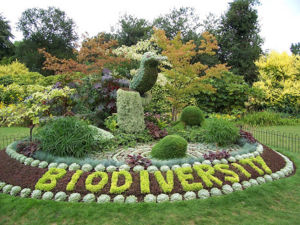 Picture a meadow in spring: grasses and flowers abound, different species competing for our attention and appreciation. But these various species also compete for other things. They compete for water and essential resources to grow, for space, for light. A similar picture emerges when we look at animals: insects, birds, mammals, fish. Usually several species coexist in the same location, albeit not always peacefully, as we shall see.

This diversity of species is beautiful, but it can be puzzling as well. Mathematical models and early biological experiments by G.F. Gause indicate that if two or more species compete for the same single limiting resource (for example water or nitrogen in the case of plants), then only the one species that can tolerate the lowest resource level will persist and all others will go extinct at that site. Granted, there may be more than one limiting resource. But S.A. Levin extended the mathematical result to say that no more species can stably coexist than there are limiting factors. In less mathematical terms: If one wants to have a certain number of biological species to coexist, then one needs to have at least that same number of ecological opportunities or niches. In the words of Dr. Seuss (from On Beyond Zebra)

And NUH is the letter I use to spell Nutches
Who live in small caves, known as Nitches, for hutches.
These Nutches have troubles, the biggest of which is
The fact there are many more Nutches than Nitches.
Each Nutch in a Nitch knows that some other Nutch
Would like to move into his Nitch very much.
So each Nutch in a Nitch has to watch that small Nitch
Or Nutches who haven’t got Nitches will snitch.

These insights were powerful incentives to develop new theory and devise new experiments, mathematical and ecological, to explain why there is so much diversity of species almost everywhere we look. Most of the answers come in the form of some kind of “trade-off”.

There is the spatial trade-off. Some species are better at exploiting a resource, some are better at moving towards new opportunities. After a patch of land frees up in the Canadian foothills – maybe from fire or logging -, aspen trees move in quickly and establish little stands there. Given enough time, the slower moving spruce will come and replace the aspen, because it can utilize the resources more efficiently.

Another trade-off is temporal when the resource fluctuates. For example, water is fairly plentiful in the Canadian prairies in the spring, but later in the summer and the fall, there can be serious droughts. Some plants grow very fast early in the year when water is abundant, but are out-competed later in the year by others who can tolerate low water levels.

When grazing or predatory species enter the picture, new opportunities for biodiversity open up. The trade-off now lies in being good at resource competition or being good at fending off predators. Sometimes, predation can induce cycles in an ecological system. A particularly well known cyclic system are the snowshoe hares and lynx in Western Canada. There is evidence for cycles already in the trading books of the Hudson’s Bay company. When the internal dynamics of predation induce cycling, the temporal trade-off can give additional opportunities for coexistence of competing species.

Most recently, researchers in ecology and mathematics recognized that not all competitive relationships between species are truly competitive but sometimes mutualistic. For example, owls and hawks hunt similar rodent species, but one hunts at night and the other during the day. Combined they don’t give their prey a safe time to forage. In some cases, researchers have found that the predation rate of two competing predators combined is higher than the sum of the predation rates in isolation. Mathematical models then demonstrate that even moderate amounts of mutualistic behaviors between competing species lead to stable coexistence. One more mechanism to promote the coexistence of a large diversity of biological populations.