The Finnish Inverse Problems Society coordinates a wealth of activity in inverse problems research in the fields of mathematics, physics, computer science and astronomy. One of the major funding sources is our Finnish Centre of Excellence in Inverse Problems Research funded by the Academy of Finland.

The annual scientific meeting of the society is called Inverse Days and held always in December. In recent years, Inverse Days have gathered together an international crowd of roughly 100 scholars.

This year’s Inverse Days is devoted to inverse problems related to the study of Planet Earth. The meeting is held in an arctic location in Inari (68°54’27.26″N, 27° 0’47.68″E), honoring the local Saame culture and emphasizing the growing importance of the Arctis. The conference themes will be organized around mathematical inverse problems relevant to Planet Earth, such as seismic inversion, remote sensing, underground prospecting and climate change.

Here is an example of laser scanning data of forest in Eastern Finland. 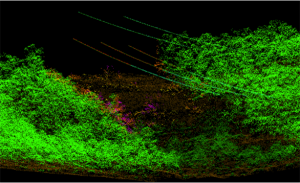