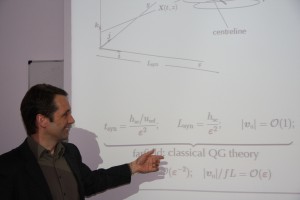 Several illustrative examples will elucidate typical mathematical contributions to climate research which, by the way, have not all been generated by mathematicians. We start with the simple concept of “percentages”, known as “dimensionless characteristic numbers” in the modeler’s jargon. In every-day life as well as in science, percentages allow us to distinguish prominent from less prominent facts or features of a system. The second part of the lecture reveals how ideas from Physics, Stochastics, Statistics, and Informatics help analyzing and quantitatively characterizing the tremendous flood of observational data that we collect every day from our planet. The third part addresses an area in which mathematics demonstrates its strength as a structural science in that it guides us in reducing highly complex mathematical models to simpler ones by focusing on only their most important aspects, and in constructing highly efficient computational methods for the detailed simulation of the underlying complex systems.

Rupert Klein received his doctorate degree in mechanical engineering from Rheinisch-Westphälische Technische Hochschule Aachen in 1988. He spent two post-doctoral years at Princeton University’s Mathematics Department, completed his Habilitation back in Aachen in 1994, and became a professor for Safety Technology at Wuppertal University in 1995. In 1997 he accepted a dual appointment as the head of the Data & Computation department of the Potsdam-Institute for Climate Impact Research and as a professor of Mathematics at Freie Universität Berlin, where today he heads the Geophysical Fluid Dynamics research group. Rupert Klein received Deutsche Forschungsgemeinschaft’s Leibniz prize in 2003 and was elected as a member of the Berlin-Brandenburg Academy of Sciences in 2005.