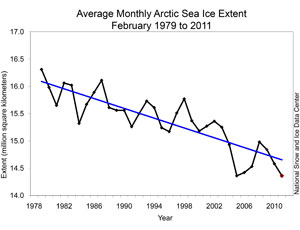 Sea ice is formed by freezing of sea water in the polar regions. Because it mediates the exchange of energy between the atmosphere and the ocean, sea ice is an important component of the global climate system. When melt ponds form, more energy is absorbed and the effect of global warming is reinforced (ice-albedo feedback). Mathematicians are actively involved in efforts to improve the modeling of sea ice. The graph shows the extent of Arctic sea ice during the period February 1979 until February 2011. The linear rate of decline for January is now 3.2% per decade.