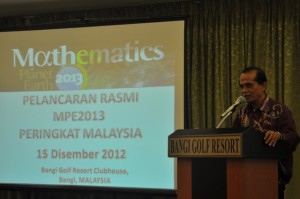 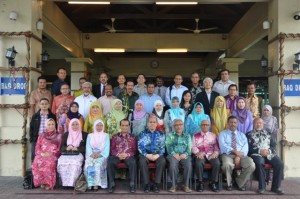 MPE 2013 Malaysia was officially launched by the Institute for Mathematical Research (INSPEM), the MPE 2013 Malaysian partner on the 15th December 2012. The occassion was attended by representatives of Malaysian universities and government educational agency and members of the Malaysian Academy of Mathematical Scientists. The launching ceremony for MPE2013 Malaysia was held on the 15th of December 2012 at Bangi Golf Resort Clubhouse near Putrajaya the administrative capital city of Malaysia. It was attended by approximately 60 people from various universities and government agencies. At this occasion, talks were given by two prominent speakers on the topics of the “Philosophy of Mathematics Education in Malaysia” and “Analysis of TIMSS Result for Malaysia”.

The programs of activities to celebrate MPE2013 Malaysia are being finalized by a committee set up by the Academy of Mathematical Scientists of Malaysia. These will be announced through MPE2013 webpage once it is completed. To start off, an International Conference on Mathematical Sciences and Statistics (ICMSS2013) will be held in Kuala Lumpur for 3 days beginning February 5, 2013.