Coronary heart disease accounts for 18% of deaths in the United States every year. The disease results from a blockage of one or more arteries that supply blood to the heart muscle. This occurs as a result of a complex inflammatory condition called artherosclerosis, which leads to progressive buildup of fatty plaque near the surface of the arterial wall.

“CHD remains the leading global cause of death, and mathematical modeling has a crucial role to play in the development of practical and effective treatments for this disease,” says lead author Sean McGinty. “The use of mathematics allows often highly complex biological processes and treatment responses to be simplified and written in terms of equations which describe the key parameters of the system. The solution of these equations invariably provides invaluable insight and understanding that will be crucial to the development of better treatments for patients in the future.”

The accumulation of plaque during CHD can result in chest pain, and ultimately, rupture of the artherosclerotic plaque, which causes blood clots blocking the artery and leading to heart attacks. A common method of treatment involves inserting a small metallic cage called a stent into the occluded artery to maintain blood flow. 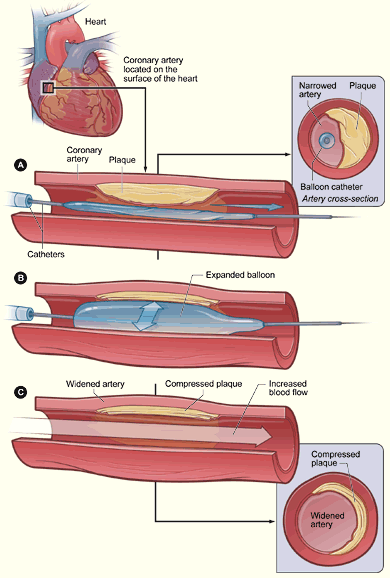 However, upon insertion of a stent, the endothelium—the thin layer of cells that lines the inner surface of the artery—can be severely damaged. The inflammatory response triggered as a result of this damage leads to excessive proliferation and migration of smooth muscle cells (cells in the arterial wall that are involved in physiology and pathology) leading to re-blocking of the artery. This is an important limitation in the use of stents. One way to combat this has been the use of stents that release drugs to inhibit the smooth muscle cell proliferation, which causes the occlusion. However, these drug-eluting stents have been associated with incomplete healing of the artery. Studies are now being conducted to improve their performance.

“Historically, stent manufacturers have predominantly used empirical methods to design their drug-eluting stents. Those stents which show promising results in laboratory and clinical trials are retained and those that do not are discarded,” explains McGinty. “However, a natural question to ask is, what is the optimal design of a drug-eluting stent?”

The design of drug-eluting stents is severely limited by lack of understanding of the factors governing their drug release and distribution. “How much drug should be coated on the stent? What type of drug should be used?” McGinty questions. “All of these issues, of course, are inter-related. By developing models of drug release and the subsequent uptake into arterial tissue for current drug-eluting stents, and comparing the model solution with experimental results, we can begin to answer these questions.”

The model proposed by the authors considers a stent coated with a thin layer of polymer containing a drug, which is embedded in the arterial wall, and a porous region of smooth muscle cells embedded in an extracellular matrix.

When the polymer region and the tissue region are considered as a coupled system, it can be shown under certain conditions that the drug release concentration satisfies a special kind of integral equation called the Volterra integral equation, which can be solved numerically. The drug concentration in the system is determined from the solution of this integral equation. This gives the mass of drug within cells, which is of primary interest to clinicians.

The simple one-dimensional model proposed in the paper provides analytical solutions to this complex problem. “While the simplified one and two-dimensional models that our group and others have recently developed have provided qualitative results and useful insights into this problem, ultimately three-dimensional models which capture the full complex geometry of the stent and the arterial wall may be required,” McGinty says.

In a complex environment with pulsating blood flow, wound healing, cell proliferation and migration, and drug uptake and binding, the process of drug release from the stent may involve a multitude of factors, which could be best understood by three-dimensional models. “This is especially relevant when we want to consider the drug distribution in diseased arteries and when assessing the performance of the latest stents within complex geometries, where for instance, the diseased artery may bifurcate,” says McGinty. “We are therefore currently investigating the potential benefits of moving to three-dimensional models.”