Last Tuesday I had the pleasure of attending the Third Annual Mitacs Awards ceremony in Ottawa. These awards recognize the outstanding R&D innovation achievements of the interns supported by the various Mitacs programs—Accelerate, Elevate and Globalink. This year, I was particularly inspired by the story of the winner of the undergraduate award category, a Globalink intern from Nanjing University in China named Liang Feng. The Globalink program invites top-ranked undergraduate students from around the world to engage in four month research internships at universities across Canada. Liang Feng spent this summer in the lab of Professor Jacob Krich of the University of Ottawa Physics Department studying Intermediate Band (IB) photovoltaics, a technology that is being used to design the next generation of solar cells.

Modern solar cells are based on silicon and other semiconductor materials and have been around for nearly 60 years. The first practical device, the “solar battery”, was invented in Bell Labs in 1954 and achieved 6% efficiency in converting incident sunlight into electricity. By 1961, it was determined that the “theoretical limit” for solar cell efficiency based on p-n semiconductors is 33.7%. As with many theoretical limits, creative scientists have found ways to break the rules, and the best solar cells today use multilayer structures and exotic materials to achieve more than 44% efficiency in converting sunlight into electricity. 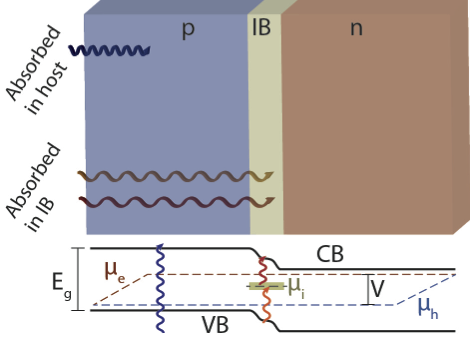 In IB solar cells, additional semiconducting materials such as quantum dots are added to make it easier for electrons to be liberated by sunlight. Instead of requiring a single higher energy photon to knock an electron from the Valence Band (VB) to Conduction Band (CB), the job can now be done by two or more low energy photons. Thus more of the sunlight’s spectrum is harnessed by the cell by providing electrons with several possible steps on their staircase to freedom.

The challenge for physicists to design such cells is: how will electrons behave at the interfaces between the materials? Physicists use computational device models to design and model the behavior of multilayer cells. The best device models are both accurate and also computationally inexpensive, though in practice as approximations are made, the models become simpler to evaluate but less accurate. Professor Krich assigned Liang Feng the task of improving the model he’d developed over the previous years, which allowed him to bring his mathematical and physical intuition to bear on the problem. According to Krich:

The most sophisticated previously-existing IBSC device models all made an approximation that the boundary condition at the interface between a standard semiconductor and the intermediate-band semiconductor should be Ohmic, meaning that electrical current flows freely through it. This boundary condition was motivated by an analogous structure, the p-i-n diode, in which it is quite successful. Liang immediately disliked the Ohmic boundary condition for the case. While I gave him the standard explanations as to why it was an appropriate approximation, he came back to me time and again with different arguments as to why the Ohmic condition simply could not be accurate. His own persistence, intuition, and mathematical and computational abilities led him to his somewhat radical hypothesis (i.e., all previously published models for IBSC’s fail in a large range of cases), which he then convincingly proved.
Liang Feng has made a significant and original contribution to improving device modeling for intermediate band solar cells. His achievement is truly his alone, because I actively discouraged him from pursuing it for several weeks. It is no exaggeration to say that this change may significantly aid the development of highly efficient and affordable solar cells.

The outstanding achievement by Liang Feng during his Globalink internship is a great example of how surprising advances in the mathematical sciences are often driven by individual creativity and persistence in the face of skepticism. Through such thinking we consistently discover that theoretical limits are only temporary obstacles on the road of innovation.