The field of celestial mechanics is an old one, going back to 90 AD when Claudius Ptolemy sought to describe the motions of the planets. However, the modern field of celestial mechanics goes back to the 1700s when Joseph-Louis Lagrange studied the celebrated three-body problem for the motion of three mass points under the influence of the force of gravity. Henri Poincaré in the late 19th and early 20th century made huge advances in our understanding of the three-body problem, with new methods employing what we call today dynamical systems theory. Much of his work was focused on a special version of the three-body problem, namely the planar circular restricted three-body problem, where two mass points move in circular orbits about their common center of mass, in a plane, while a third point of zero mass moves in the same plane under the influence of the gravity of the two mass points. One can imagine these two bodies to be the Earth and the Moon, while the zero mass point can be a rock, for example a meteorite. Poincaré’s work indicated that the motion of the zero mass point could be very complex and very sensitive, so much so that it would be chaotic.

If one considers the motion of a small object, say a spacecraft that is going to the Moon, under the gravitational influence of both the Earth and the Moon, then a standard route to the Moon from the Earth is called a Hohmann transfer, after the work of the engineer Walter Hohmann in the 1920s. This yields a flight time of about 3 days. The path is not chaotic since the spacecraft is going fairly fast; in fact, it looks almost linear. When a spacecraft approaches the Moon on this transfer, it needs to slow down a lot, by about 1 kilometer per second, in order to be captured into lunar orbit. This requires a lot of fuel, which is very expensive—about a million dollars per pound!

Is there a better way? Is there a way to find a transfer to the Moon that is captured into lunar orbit automatically, without the use of rocket engines? The answer was not known until 1986, when the writer of this article (Edward Belbruno) found a way to do it. His 1987 paper was the first to demonstrate the process of ballistic capture—a transfer from the Earth that took 2 years to reach the Moon and resulted in automatic capture. In fact, the author showed that the region about the Moon where this capture can occur is one where the spacecraft must arrive slowly enough relative to the Moon. Then the balance of the gravitational tugs of the Earth and the Moon on the moving spacecraft cause the motion of the captured spacecraft to be chaotic. This region is called today the weak stability boundary.

In 1991, this methodology was put to the test when the author found a new route to the Moon to rescue the Japanese spacecraft, Hiten, which successfully arrived there in October of that year (Figure 1). This route was a more practical 5 months in duration and actually needed to use the more complex four-body problem model between the Earth, Moon, Sun and spacecraft. This route has to make use of not only the weak stability boundary of the Moon for ballistic capture, but also the weak stability boundary of the Earth due to the Earth and Sun gravitational interaction, which occurs about 1.5 million kilometers from the Earth. The spacecraft got to the Moon in ballistic capture by first flying out 4 times the Earth-Moon distance to 1.5 million kilometers, then falling back to the Moon for ballistic capture. This type of route, called an exterior Weak Stability Boundary (WSB) transfer, was used by NASA’s GRAIL mission in 2011. The original 2-year ballistic capture transfer was used by the European mission SMART-1 in 2004. There are plans to use them for many more space missions in the future. 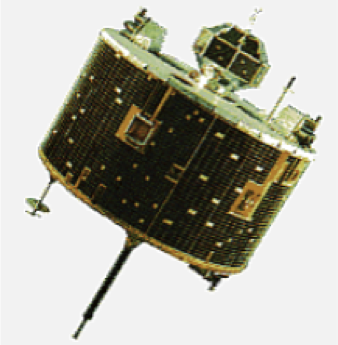 In 2005, a different application of weak transfer was published by the author and J.R. Gott III as a way to explain where the giant Mars-sized impactor that is hypothesized to have collided with the Earth to form the Moon from the remnants of the collision, came from. The mechanism is called the Theia Hypothesis, for the hypothesized impactor called Theia. The hypothesis is that Theia could have been formed in one of the equilateral Lagrange points in the Earth-Sun system, which are two locations 60 degrees ahead of the Earth and behind the Earth, on the Earth’s orbit about the Sun (Figure 2). These locations are stable, where a particle of negligible mass will be trapped. The hypothesis is that Theia formed by accretion of many small rocks, called planetesimals, over millions of years. As Theia was forming it gradually moved away from the Lagrange point locations where it was weakly captured. It eventually escaped onto a weak transfer from the Lagrange region and hit the Earth with low energy. NASA investigated this theory in 2009, when it sent its two STEREO spacecraft to these regions to look for any residual material. Since the spacecraft were not originally designed to look for this type of material, their search was inconclusive. 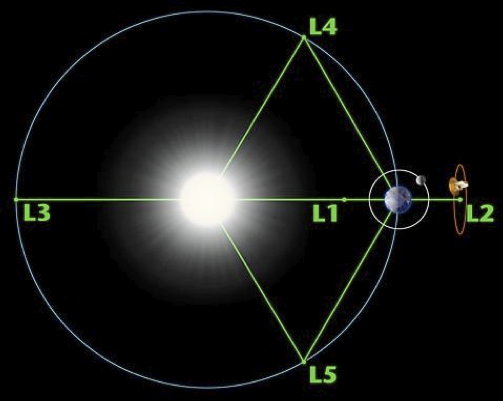 A very interesting application of weak transfer on the origin of life on Earth was recently published by the author, Amaya Moro-Martin, Renu Malhotra and Dmitry Savransky (BMMS) in 2012 in the journal Astrobiology. They considered a special type of cluster of stars, called an open star cluster, which is a loose aggregate of stars moving slowly with respect to each other with relative velocities of about one kilometer per second. It is thought by many that the Sun formed in such a cluster about 5 billion years ago. They were trying to understand the validity of the Lithopanspermia Hypothesis. This hypothesis is that rocks containing biogenic material were ejected from a given planetary system of a star, S1, and captured by another star, for example the Sun. Eventually, some of the rocks would crash onto the Earth. Previous studies of this problem dealt with high-velocity ejection of rocks from S1, on the order of 6 kilometers per second. They found that the probability of capture of these rocks by another star, for example the Sun, was negligible, being essentially zero. The study by BMMS, taking 8 years, utilized very low-velocity escape from S1, on the order of 50 meters per second, and examined the likelihood of weak capture by the Sun. They found that the probability increased by an order of one billion! This implies that about 3 billion rocks could have impacted the Earth over the time spans considered of about 400 million years. The time spans involved coincided nicely with the emergence of live on Earth.

Last, we mention that the weak stability boundary is a very interesting region about one of the mass points, for example, in the planar circular restricted three-body problem. An interesting result on the properties of this region was published by F. Garcia and Gerard Gomez in 2005. This was further studied by the author, Marian Gidea and Francesco Topputo in several publications since 2005, where this boundary, say about the Moon, is shown to be a subset of a very complex region consisting of invariant manifolds associated to the collinear Lagrange points, L1, L2. (Figure 3) 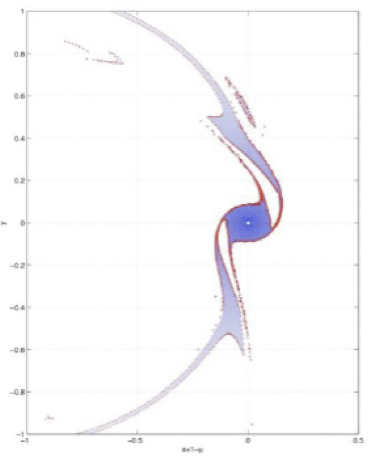