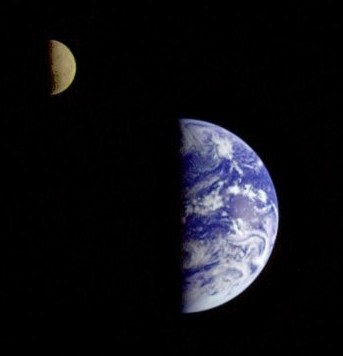 While I am a pure mathematician working in dynamical systems, I have always been fascinated by the mathematics of the N-body problem and its applications to celestial mechanics in general, and to the Solar system in particular. This is why I had insisted for the organization of a long-term program on celestial mechanics within MPE2013, and that CRM hosts a workshop on the the topic. The workshop Planetary Motions, Satellite Dynamics, and Spaceship Orbits took place at CRM on July 22-26. Co-organizers were Alessandra Celletti, Walter Craig and Florin Diacu.

The week-long activity brought together the major players of the field. Surprisingly, many of these people had never met before, and the workshop played a structuring role in the community of scientists attached to the theme. The lectures were all inspiring and excellent. For an amateur like me, the workshop was like a school, and it has been an exceptionally rewarding experience.

Planetary motions are usually modeled through the N-body problem, which is the study of trajectories of N mass particles subject to Newton’s law of gravitation. Since Poincaré, this problem has become the specialty of mathematicians. The underlying dynamical system is nonintegrable as soon as N>2. The lectures of the workshop covered the whole spectrum from N=3 to N very large. Several lectures dealt with the restricted 3-body problem, which is the limit case where two bodies move according to the 2-body problem on conics with a focus at their center of mass and a third body of zero mass is attracted by the two large bodies. This model is useful for studying the movements of objects like satellites, spatial engines or small asteroids subject to the attraction of two large celestial objects.

In the case of N=3, it is known that there are five families of periodic synchronous motions for the three bodies: after a change of coordinates to a moving frame, these special trajectories become equilibrium positions in the new frame, called Lagrange equilibrium points (also libration points). Their associated invariant manifolds play an essential role in organizing the dynamics and the different types of motion. They provide low-energy pathways for interplanetary missions. They can have transversal crossings and help finding chaotic motions and Arnold diffusion.

Several lectures described the normal forms and their applications. In particular, Gabriella Pinzari described her recent results with Luigi Chierchia showing the existence and nondegeneracy of a Birkhoff normal form for the planetary problem and its consequence for the existence of a large measure set of stable motions and lower-dimensional elliptic tori in phase space, thus solving a problem open for more than 50 years.

Studying near-collision orbits is a challenge in the N-body problem. In the limit, the system becomes singular, and a desingularization process is necessary to understand the phenomenon. A geometric desingularization was presented by Richard Moeckel, while the lecture of Sergey Bolotin explained how a variational approach enables us to transform the problem to a billiard-type problem with elastic collisions.

Edward Belbruno was a pioneer in low-energy trajectories. He became famous when his low-energy trajectories to the Moon found an application in 1990. The Japanese had lost contact with their space engine MUSES-B, which was supposed to go to the Moon. MUSES-A, renamed Hiten, was orbiting around the Earth. The low-energy trajectory of Belbruno allowed sending Hiten to the Moon in 1991 after 150 days travel. The idea was to use a transfer trajectory to the weak stability boundary of the Moon, with ballistic capture, i.e., no breaking necessary to be captured. Belbruno described his recent fascinating achievements showing the existence of low-energy routes enabling transfer of material between planetary systems, with transit times up to several hundred millions years. On the basis of this work it can no longer be excluded that the origin of life on Earth could come from a remote planetary system. I have invited him to describe the details of this fascinating result in a future blog on September 6.

Too often, we have the image of the mechanics of the N-body problem as nondissipative. But it is in fact slightly dissipative (for instance, because of the atmosphere around the Earth which slows down its rotation around its axis), and KAM theory has been adapted to treat these cases. This dissipation plays a major role in getting stable motions and providing rigorous proofs of the stability of these motions with integer-arithmetic numerical techniques.

Can we explain why the Solar system is exactly as we observe it? Several lectures addressed theis issue. While energy is dissipated, angular momentum is preserved. Hence, what is the minimal energy configuration for a N-body system with fixed angular momentum? Dan Scheeres showed that this ill-posed question becomes well-posed if, instead, the question is formulated accounting for finite density distributions, thus leading to a natural “granular mechanics” extension of celestial mechanics. The lecture of Vladislav Sidorenko addressed the problem of understanding the quasi-satellite regime of small celestial bodies like the asteroids and the route from the formation of the Solar system to its present state.

The case with N large was covered by a spectrum of applications. Stanley Dermott presented the erosion of the asteroid belt under Martian resonances; Martin Duncan presented a model of core accretion for giant planet formation from billions of planetesimals and its numerical simulations; Anne Lemaitre explained the challenges of understanding the dynamics of the tens of thousands of space debris with diameter between 1 cm and 10 cm, which are too numerous to be followed individually but sufficiently large to represent a real danger. The motion of the debris is simulated with an accurate symplectic integration scheme and a model which takes into account the effects for solar radiation pressure and Earth shadow crossings. The goal is to understand where the space debris are more likely to accumulate. Jacques Laskar discussed the paleoclimate reconstruction through the past planetary motions of the Solar System: a strong resonance between the asteroids Ceres and Vesta prevents any precise reconstruction beyond 60 Myr, but a more regular oscillation of the eccentricity of the Earth with period 405 Kyr can nevertheless be used for calibrating climates over the entire Mezozoic era.

This workshop has really been fascinating.