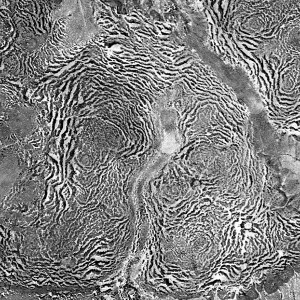 From above, the ground almost looks like the fur of a big cat. Vegetation and barren land array to form tiger stripes and leopard spots in the dry landscape surrounding Niamey, Niger. These types of patterns are common to semi­arid ecosystems, so­called because there is enough water to support some vegetation but not enough to support it uniformly. Besides being visually striking phenomena, vegetation patterns may have a lot to tell us about how ecosystems are changing.

Semi­arid ecosystems are in a difficult position. They exist in dangerous limbo between vibrant vegetated ecosystems and desolate deserts. And these ecosystems are not marginal. Semi­arid ecosystems support over a third of the world’s population. If climate change pushes an ecosystem towards increased aridity, then semi­arid ecosystems can become deserts incapable of supporting people. To a great extent, these deserts would be here to stay. A simple uptick in rainfall, for instance, could not return things to the way they used to be, since desertification is an erosive process that irreversibly mars landscapes.

Because of the role that vegetation patterns occupy as signals of diminishing water in an ecosystem, scientists and mathematicians are interested in what these patterns say about how close an ecosystem is to transitioning to desert. It is possible that both the characteristic width and the qualitative appearance of the patterns may function as such indicators, i.e. vegetation stripes may become spaced farther apart or turn into patchy spots as the climate gets drier. This is a compelling reason indeed to carefully understand these patterns through the lens of mathematics.

It turns out that vegetation patterns in semi­arid ecosystems are probably caused by the same mechanism that causes patterns to form in lots of other systems: feedback. In this case, the feedback occurs in how plants and water interact. Plants help each other at short scales by sharing nutrients and trapping water in the soil with their root systems. This causes the feedback loop in which moderate to high densities of plants are self­sustaining. However, water is a limiting factor that stops vegetation from becoming dense, and it prevents growth in sparsely vegetated areas. These factors together result in vegetation attempting to spread outwards from areas of high density but then being restricted by the effects of limiting water so that localized structures form.

A particularly illustrative example comes from patterns that form on hillsides.

The figure from Thierry et al. displays a cross section of a vegetation band on a shallow slope. Water comes into the system by precipitation, which turns into runoff as it travels downhill along the soil’s surface. If this runoff travels along a bare­ground region and encounters a patch of vegetation, it becomes absorbed by the vegetation and porous soil. This helps the patch grow more robustly. Since water is limited, plants on the uphill­side of the band are preferentially nourished. The density of plants away from this edge tapers off until the start of another bare­ground region. As the average water in a system diminishes, it is easy to imagine the vegetated bands becoming smaller and the bare regions becoming larger; the stripes may drift apart.

A number of mathematical models for vegetation patterns on flat terrain treat vegetation and water as components that react with one another and diffuse in space. Some of these models include the feature of qualitatively different patterns forming for different levels of precipitation. This mirrors what ecologists observe in semi­arid regions with different amounts of mean rainfall. 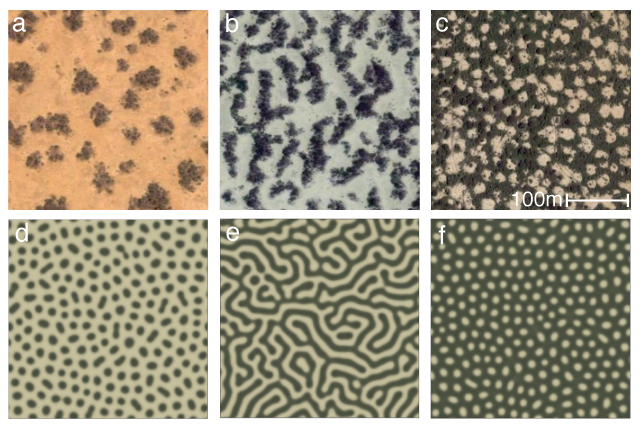 Vegetation patterns are a mysterious phenomenon that we can think about in the same way as patterns that form in many other contexts. What’s more, they may have importance that transcends their beauty. If they can be used to predict if an ecosystem is approaching collapse, they could be immensely important to the conservation of land. The mathematical study of these patterns is crucial in our understanding of the dynamics of semi­arid ecosystems, and could have an impact in how humanity responds to the danger of climate change.