Uncertainty issues are paramount in the assessment of risks posed by natural hazards and in developing strategies to alleviate their consequences. In a paper published last month in the SIAM/ASA Journal on Uncertainty Quantification, the father-son team of Jerome and Seth Stein describe a model that estimates the balance between costs and benefits of mitigation following natural disasters, as well as rebuilding defenses in their aftermath. Using the 2011 Tohoku earthquake in Japan as an example, the authors help answer questions regarding the kinds of strategies to employ against such rare events.

“Science tells us a lot about the natural processes that cause hazards, but not everything,” says Seth Stein. “Meteorologists are steadily improving forecasts of the tracks of hurricanes, but forecasting their strength is harder. We know a reasonable amount about why and where earthquakes will happen, some about how big they will be, but much less about when they will happen.”

Earthquake cycles—triggered by movement of the Earth’s tectonic plates and the resulting stress and strain at plate boundaries —are irregular in time and space, making it hard to predict the timing and magnitude of earthquakes and tsunamis. Another conundrum for authorities in such crisis situations is the appropriate amount of resources to direct toward a disaster zone.

In this paper, the authors set out to “find the amount of mitigation—which could be the height of a seawall or the earthquake resistance of buildings—that is best for society,” explains Stein. “The challenge is deciding how much mitigation is enough. Although our first instinct might be to protect ourselves as well as possible, resources used for hazard mitigation are not available for other needs.”

The objective is to provide methods for authorities to use their limited resources in the best possible way in the face of uncertainty.

Selecting an optimum strategy depends on estimating the expected value of damage. This, in turn, requires prediction of the probability of disasters. It is still unknown whether to assume that the probability of a large earthquake on a fault line is constant with time (as routinely assumed in hazard planning) or whether the probability gets smaller after the last incidence and increases with time.

Hence, the authors incorporate both these scenarios using the general probability model of drawing balls from an urn. If an urn contains balls that are labeled “E” for event and “N” for no event, each year is like drawing a ball. Following the draw, the ball can be replaced or not replaced in the urn based on whether or not the probability of an event depends on a previous event having occurred and the time since the past occurrence. The model also incorporates parameters for strain accumulation at plate boundaries as well as strain release during earthquakes. 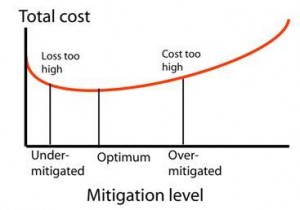 How much mitigation is needed? This is the bottom of a U-shaped curve that is the total cost – the sum of both the cost of mitigation and the expected losses in a disaster. More mitigation can reduce losses in possible future disasters, at increased cost. Less mitigation reduces costs, but can increase potential losses. The bottom of the curve is a “sweet spot” – a sensible balance.

To determine the advantages and pitfalls of rebuilding after such disasters, the authors present a deterministic model. Here, outcomes are precisely determined by taking into account relationships between states and events.

Such models can also be applied toward other disaster situations, such as hurricanes and floods, and toward policies to diminish the effects of climate change. “Given the damage to New York City by the storm surge from Hurricane Sandy, options under consideration range from doing nothing, using intermediate strategies like providing doors to keep water out of vulnerable tunnels, to building up coastlines or installing barriers to keep the storm surge out of rivers,” explains Stein. “In this case, a major uncertainty is the effect of climate change, which is expected to make flooding worse because of the rise of sea levels and higher ferocity and frequency of major storms. Although the magnitude of these effects is uncertain, this formulation can be used to develop strategies by exploring the range of possible effects.”

To read the detailed article and view the source paper, click here.