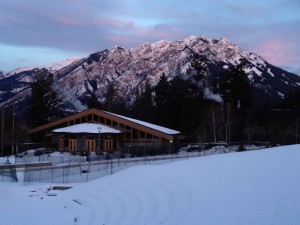 I was planning to send an update every day from the data assimilation workshop at the Banff Center, but I’ve been so busy here that by the time I get back to my room I’m ready to collapse. The Banff Center is the best place I know of for a workshop. It’s almost like working hard and being on vacation at the same time, with the benefits of both. The scenery is spectacular, the facility is first rate, the food is wonderful and we are indeed working hard. As I told people who asked me what it would be like, you have to be at the top of your game the entire week. This is a talented enthusiastic group, the talks have been superb, all of them, and the discussion following the talks has been so interesting that nobody wants to stop.

I knew it was going to be this way. I rode the shuttle from the Calgary airport to Banff Center with Kayo Ide, Andrew Lorenc and Juan Restrepo, and a serious scientific discussion broke out almost as soon as we settled into our seats. The two hour shuttle ride went by in a blink.

We have 24 participants, some grad students, some postdocs, a few mid career types and a few old graybeards like me. We were expecting 26, but there were two last minute cancellations, both for medical reasons. There was a time when everyone in the world who worked on data assimilation in the ocean and atmosphere would have fit in the conference room here, but that was decades ago, and now the field is large enough that it’s impossible to know everybody, as it was in the late 1980s and early 1990s. I’m still surprised to hear about interesting work being done by people that I have never met.

Andrew Lorenc gave the opening talk, as he did at the last Banff data assimilation meeting in 2008. He’s one of the very few people who’s still active and has been doing data assimilation longer than I have. He gave an excellent hour-long talk on the outlook for data assimilation at the UK Met Office for the next 5-10 years. We also had talks by people from Environment Canada, NASA and NCEP, and a nice talk on hurricane prediction by Fuqing Zhang.

Tuesday’s talks were mostly concerned with ensembles, ensemble methods and direct calculation of probability density functions. Monday and Tuesday provided us with plenty of material for detailed discussion. We left Wednesday afternoon free for us to take a break and explore Banff and the surrounding mountains. A number of us went hiking. The views were spectacular, but the trails were icy and the steep parts were treacherous to navigate. Upon return to the Banff Center I took advantage of the excellent gym to have a swim and a soak in the hot tub.

We had fewer talks today, with the hour-long finale given by Pierre Gauthier on diagnostics for data assimilation and models. Pierre is another one of the experienced people who attended. His topic was well chosen and his presentation was clear, thorough and thought provoking, as his presentations have been consistently over the twenty odd years that I have known him.

Meetings like this are exceptional. The long discussions with talented enthusiastic people at all stages of their careers reminded me why I signed up for the life of a scientist. Details can be found on the BIRS website.