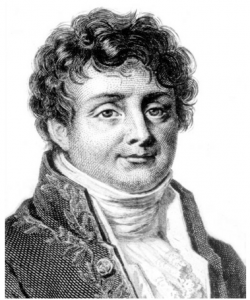 Jean Baptiste Joseph Fourier (1768-1830), French mathematician and natural philosopher, did groundbreaking work in mathematics and the theory of heat. He was the first to propose that the Earth's atmosphere acts to raise the planet's temperature.

“As a dam built across a river causes a local deepening of the stream, so our atmosphere, thrown as a barrier across the terrestrial rays, produces a local heightening of the temperature at the Earth’s surface.” Thus in 1862 John Tyndall described the key to climate change. He had discovered in his laboratory that certain gases, including water vapor and carbon dioxide ( CO${}_2$), are opaque to heat rays. He understood that such gases high in the air help keep our planet warm by interfering with escaping radiation.

This kind of intuitive physical reasoning had already appeared in the earliest speculations on how atmospheric composition could affect climate. It was in the 1820s that a French scientist, Joseph Fourier, first realized that the Earth’s atmosphere retains heat radiation. He had asked himself a deceptively simple question, of a sort that physics theory was just then beginning to learn how to attack: what determines the average temperature of a planet like the Earth? When light from the Sun strikes the Earth’s surface and warms it up, why doesn’t the planet keep heating up until it is as hot as the Sun itself? Fourier’s answer was that the heated surface emits invisible infrared radiation, which carries the heat energy away into space. He lacked the theoretical tools to calculate just how the balance places the Earth at its present temperature. But with a leap of physical intuition, he realized that the planet would be significantly colder if it lacked an atmosphere. (Later in the century, when the effect could be calculated, it was found that a bare rock at Earth’s distance from the Sun would be well below freezing temperature.)

How does the Earth’s blanket of air impede the outgoing heat radiation? Fourier tried to explain his insight by comparing the Earth with its covering of air to a box with a glass cover. That was a well-known experiment — the box’s interior warms up when sunlight enters while the heat cannot escape. This was an overly simple explanation, for it is quite different physics that keeps heat inside an actual glass box, or similarly in a greenhouse. (As Fourier knew, the main effect of the glass is to keep the air, heated by contact with sun-warmed surfaces, from wafting away. The glass does also keep heat radiation from escaping, but that’s less important.) Nevertheless, people took up his analogy and trapping of heat by the atmosphere eventually came to be called “the greenhouse effect.”